Hougang fight in 2020 was between 2 families, started with a brush on the shoulder 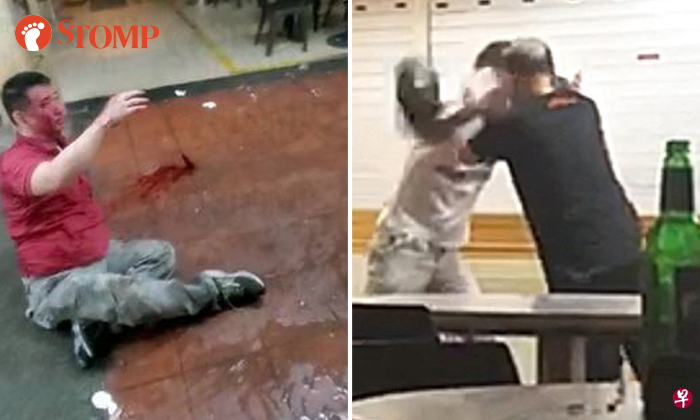 Two men have each been sentenced to 12 days' jail over a violent fight that broke out at a coffee shop in Hougang in August 2020.

A Stomper had witnessed the incident that occurred at Block 631 Hougang Avenue 8 on the night of August 9, 2020, and taken a video.

The Stomper also said that those involved in the fight "wouldn't let the matter rest" despite being injured.

Five people were arrested for affray, Stomp reported in 2020.

A Shin Min Daily News report on Tuesday (May 10) shed light on how the altercation was between two families.

Cai Jiacai, 64, had been drinking alcohol with his younger brother, daughter and daughter's boyfriend at the coffee shop on the night of the incident.

When on his way to the toilet, Cai accidentally brushed the shoulder of a woman identified as Chen Hongji, 59.

Cai did not know Chen Hongji personally. However, Cai's wife and younger brother have had clashes with Chen Hongji before.

Both families maintained their peace until for some unknown reason, Cai suddenly approached the Chens' table and got into a tussle with Chen Meishun.

The boyfriend of Cai's daughter attempted to pull Cai back while several others also tried to intervene.

However, Cai suddenly grabbed a beer mug and walked towards Chen Meishun.

Chen Hongji and Chen Shunying then each picked up a chair from their side, while Chen Meishun picked up a beer mug.

A fight soon broke out, with Cai and Chen Meishun smashing each other's heads with the beer mugs. Meanwhile, the other two Chen siblings threw chairs and beer bottles at Cai.

Not to be outdone despite being outnumbered, Cai picked up a chair that had been thrown at him and used it to hit Chen Meishun with great force.

According to Shin Min, Cai pleaded guilty to one count of voluntarily causing hurt on Monday (May 9) and was sentenced to 12 days in jail.

Chen Meishun had pleaded guilty to the same offence and was similarly jailed for 12 days, but was also fined $1,000 for violating the Covid-19 (Temporary Measures) Act.