Horse on the loose at Eng Neo Avenue was just trying to find its way home, says owner 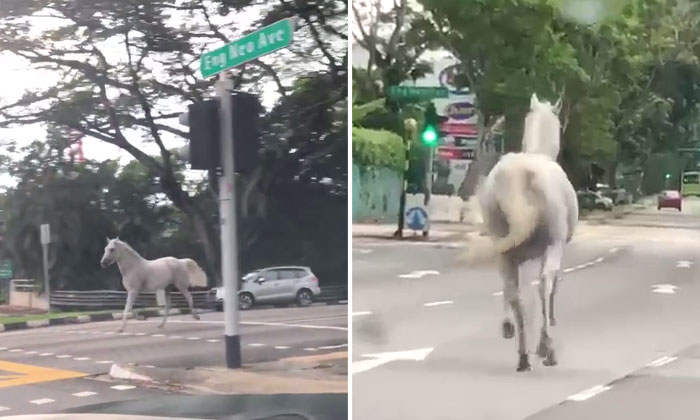 It was a sight to behold, as a muscular white horse trotted next to cars at a traffic junction along Eng Neo Avenue.

But this mare was not horsing around, and was in fact trying to find her way back to her stable, her owner Ronnie Lim told The Straits Times after the sighting was captured on video by a member of public.

The 15-second long video, which was posted on Facebook on Sunday (April 5), had at least 7,000 shares and more than 1,200 comments within three hours of its being posted.

Mr Lim, who is the owner of Paisano Polo Academy at Turf Club Road, said the 11-year-old horse, named Cocorita, was found within 20 minutes following her escape at 4pm on Sunday.

"Horses tend to find their way back and we're happy she's all right," said Mr Lim, 58, adding that they had found her grazing on a grass patch along Eng Neo Avenue. "She probably got distracted and had a bite."

"She was calm and we put a collar on her and walked her back to the stables," he said, adding that Cocorita was a children's riding horse and was usually mild-mannered.

He said a horse handler had taken Cocorita to the paddock that afternoon and was just about to close the door when there was a loud screech from some vehicles on the road nearby, causing her to take fright and run.

In response to queries, Dr Alwyn Tan, deputy director of the Animal and Veterinary Service under the National Parks Board, said it is investigating the incident and working with the academy to prevent such an incident from recurring. "Our vets have examined the animal and found it to be in good health," he added.

The academy has about 15 horses in total, and Mr Lim said this is the first time such a thing has happened.

"I'm just glad that no one or animal got injured. While I usually get quite flustered, I've realised that this incident has brought some smiles and laughter amidst all the gloom and doom right now," he said.

Related Stories
MP Louis Ng reveals the beautiful reason why there are horses in Yishun
New neigh-bour? Horse spotted in Yishun is for upcoming community project
Hot topic of the week: Yishun resident stunned by cow at lift landing: Here's likely why it was there
More About:
horse
animal
unusual sight