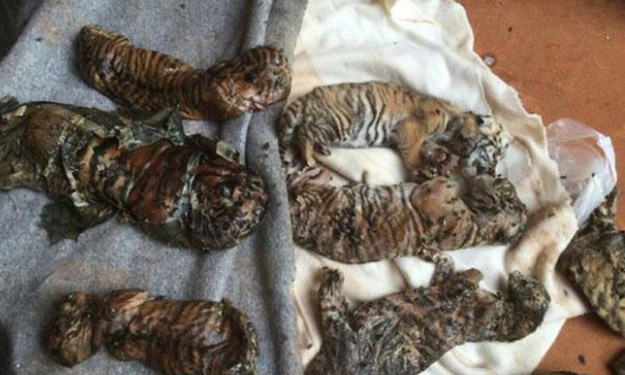 The famous Tiger Temple in Thailand has come under fire after a recent horrific discovery of 40 tiger cubs found in the freezer.

According to Bangkok Post, wildlife authorities raided the Kanchanaburi’s Tiger Temple to relocate more than 100 big cats after the grisly find.

The dead cubs -- which observers said on Twitter appeared to have been killed recently -- were in a kitchen area at Wat Pa Luangta Maha Bua in Sai Yok district, said Adisorn Noochdumrong, deputy director-general of the Department of National Parks, Wildlife and Plant Conservation.

The first image was posted to Twitter by Dario Pignatelli, a Bangkok-based photojournalist. Speaking by telephone, he said he took the photo at around 10:30am, and counted at least 40 bodies.

They removed 137 tigers from the monks' custody after years of allegations of wildlife trafficking and animal abuse.

Khaosod English reports that there were also animal intestines in containers, heaps of deer horns, a dead bearcat and a bull's skull. Bearcats, also known as binturongs, are protected animals under Thai laws.

The dead cubs "must be of som.e value for the temple", Adisorn Nuchdamrong, from Thailand's Department of National Parks, told Reuters news agency. "But for what is beyond me."

Wildlife activists have long accused the Tiger Temple of animal abuse and trafficking tigers and their body parts. The temple has vehemently denied the allegations.

If the tiger cubs indeed turn out to have just been killed, it would support accusations it was knowingly engaged in illegal, for-profit breeding and trafficking of the animals.