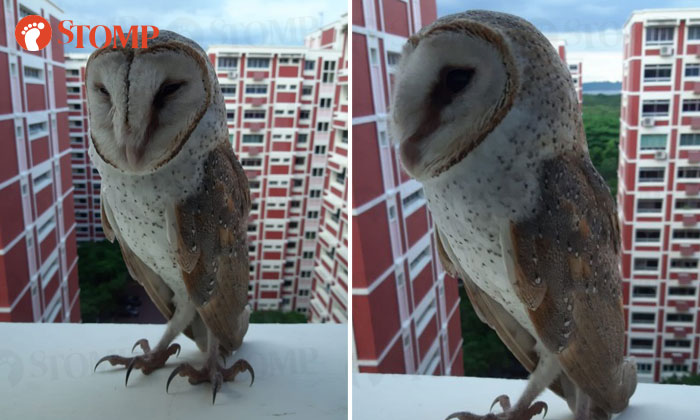 Stomper Rina was pleasantly surprised to find a barn owl outside the window of her Pasir Ris flat on Sunday afternoon (Oct 27).

She told Stomp it was the first time she has one in her neighbourhood.

"As far as I know, it is a rare species although it has been sighted in Singapore," she said.

"After I took its photo at about 4pm, it remained at the same spot outside my window and went back to sleep.

"Whenever there was a noise, it would wake up and appear curious.

"My family tried to shoo the owl away otherwise we would not be able to open the window so we tried sliding the glass in an attempt to chase it but it merely turned its head to observe the sliding window."

Rina said the owl eventually flew off in the direction of other blocks near Pasir Ris Park.

Barn owls are uncommon compared to other native owls like the Sunda Scops owl.

They are elusive and so, are not often sighted although Stomp has reported a few sightings over the years.

They typically roost and nest in abandoned buildings and also make their home in trees.