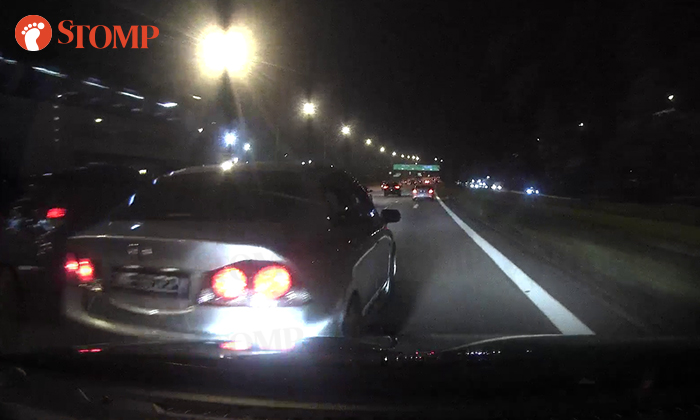 A Honda was filmed switching into a lane on its right and almost colliding with Stomper G's car along Central Expressway (CTE) at about 11pm on Oct 28.

G told Stomp: "I was driving home along CTE towards Seletar Expressway.

"My wife was with me when we encountered this incident near the exit towards Ang Mo Kio Avenue 1.

"A white Honda changed lane suddenly and drove in front of my car. The driver didn't signal.

"The space was very tight, so I had to slam on the brakes when I saw the car advancing towards me.

"If I had stopped any later, I would've been in an accident. Fortunately, my wife and I are safe.

"In order to make sure roads are safe for all drivers, riders and pedestrians, such reckless and dangerous driving should be deterred.

"We shouldn't take action only when accidents occur.

"Drivers should learn to be gracious.:"