Honda SJU6381G causes trailer truck to topple, drives off despite being high-beamed 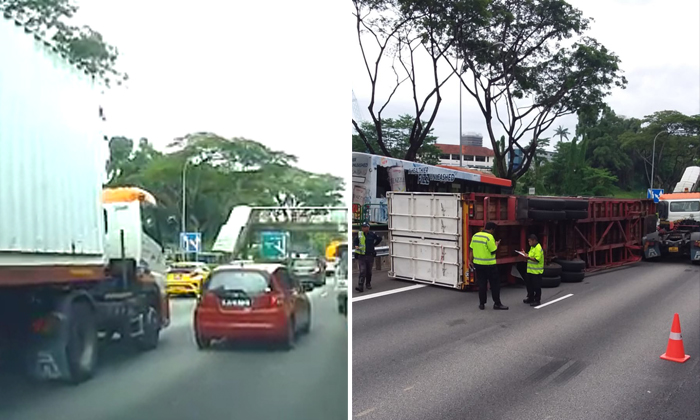 A trailer truck encountered a hiccup on the road on Friday afternoon (Dec 15) -- no thanks to a car driver.

Several Stompers alerted Stomp to photos and videos of the accident, which occurred along the Pan-Island Expressway (PIE) at around 4.20pm. It took place in the direction of Changi and before the Toa Payoh exit.

The circulated videos show how a red Honda, with licence plate number SJU6381G, had been travelling on the right side of the truck before trying to cut into the same lane.

Posting as evidence for the truck company and Traffic Police to ensure driver of SJU6381G account for this.

In an attempt to avoid a collision, the truck braked, causing its container to dislodge and fall off.

Another video uploaded by ROADS.sg suggested that the Honda driver was aware of the accident, but did not stop despite another car flashing its high beams as an alert.

Posting as video witness of red Honda SJU6381G driving off from accident scene even when back car highbeamed him and he...

The accident resulted in a traffic jam on the PIE.

Related Stories
Trailer that overturned at BKE: Video shows how it happened
Trailer driver arrested after accident along Bidadari Park Drive
Driver arrested after trailer overturns on its side along Tampines Avenue 11
More About:
accident
reckless driver
truck
trailer