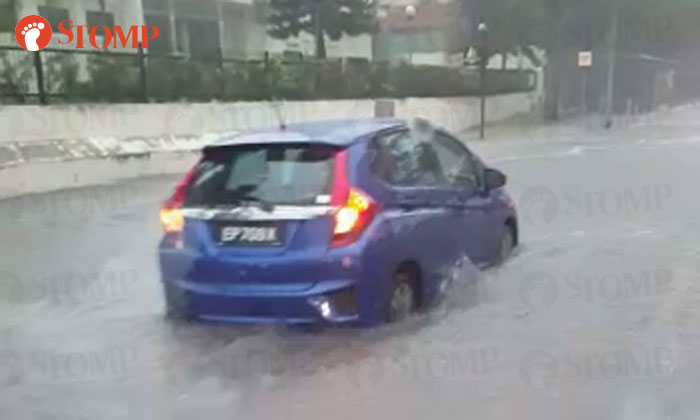 A Honda car got stuck in a flash flood along Yio Chu Kang Road towards Ang Mo Kio Avenue 5 on Thursday (Sep 19) at about 5.30pm.

Stomper Ah Boy alerted Stomp to the situation and shared photos he took while travelling along the road in a lorry.

In the video, water can be seen reaching half of the car tyres' height.

Ah Boy said that no other vehicles were stuck in the flood.

"The lorry passed through with no problems," he said.

"The bus siam (avoided) the lane too."

He added that the flood had reached past the junction at Ang Mo Kio 5 but there were no other "victims".

At 5.55pm, the Public Utilities Board (PUB) tweeted that the flash floods at Ang Mo Kio Avenue 6 had subsided and that traffic was passable.

Stomper YZK84 also shared a video of a flash flood at about 5.51pm on the same day where the water level reached up to the pavement so you could not tell where the road's kerb was.