HIV-infected blood being injected into bananas? Don't fall for this hoax 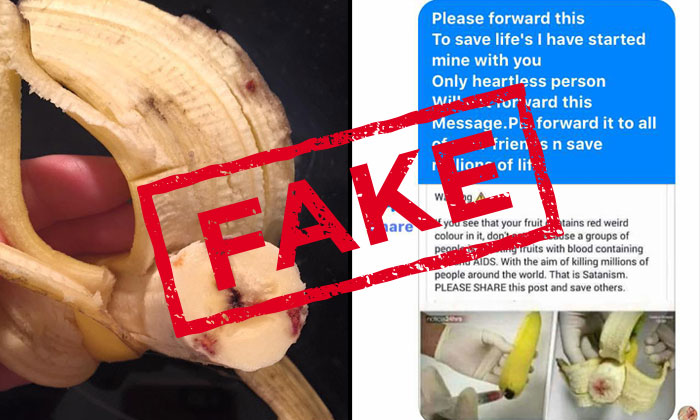 Messages being forwarded and circulated online claim that blood infected with the Human Immunodeficiency Virus (HIV) is being deliberately injected into fruits, particularly bananas.

A Stomper shared with Stomp one such message that had he received and asked us to "verify this" and "alert the public".

There is nothing to alert, however, except for the fact this is an old hoax that has resurfaced online and is causing undue panic.

The hoax has existed from as far back as in 2015, when a mother in Colorado, USA, shared Facebook photos showing red spots in her son's banana in a Nov 7 post.

According to The Washington Post, someone else named Anna Aquavia then reposted the pictures to her own Facebook page on Nov 9, with false details about the blood (why would anyone do this? WHY?!)

Anna had written: "Someone is injecting blood into bananas. The hospital tested the bananas and it is indeed blood."

However, the discolouration on the spotty bananas is actually just a type of deformity caused by bacteria.

This stems from a natural condition known as mokillo, which happens when a common bacteria enter the fruit and causes its centre to turn dark red.

More importantly, there are no health risks to people who have eaten these 'red bananas' i.e. you will not be infected with HIV or AIDS.

Snopes.com, a website known for validating and debunking stories as well as urban legends of question origin, has also explained this scientific phenomenon:

Nigrospora is a fungal disease that causes the centre of the banana to turn dark red. Nigrospora can infect the fruit in tropical climates where bananas are grown.

Mokillo, moko, and blood disease bacterium are bacterial diseases that can also cause red discoloration in bananas.

While unappealing to eat, these diseases affecting bananas are not a threat to human health, however when in doubt, throw it out or compost them.

Lastly, it is nearly impossible for HIV to be transmitted via food.

Except for rare cases in which children consumed food that was pre-chewed by an HIV-infected caregiver, HIV has not been spread through food. The virus does not live long outside the body. You cannot get it from consuming food handled by an HIV-infected person; even if the food contained small amounts of HIV-infected blood or semen, exposure to the air, heat from cooking, and stomach acid would destroy the virus.