Hitman slashing trial: Beauty queen still living with victim -- who's not in contact with his Thai wife 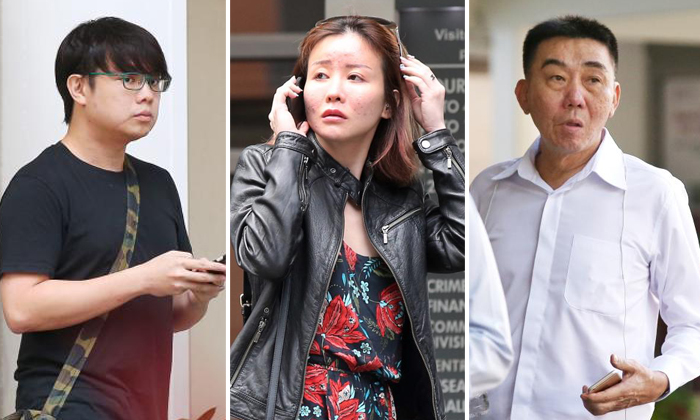 A banquet waiter whose face was slashed by an alleged hitman got into a relationship with a beauty queen - even though he knew she was seeing a businessman who supported her financially, a court heard on Thursday (May 17).

Joshua Koh Kian Yong, who himself is married to another woman, testified on day two of a trial in which the businessman Lim Hong Liang, 54, who owns a logistics company, and mover Ong Hock Chye, 47, each face a charge of conspiring to cause grievous hurt to Mr Koh on April 30, 2016.

Mr Koh, 34, said he is still Ms Chen's boyfriend and they live together in Kembangan. He is not in contact with his Thai wife, the court heard.

Mr Koh and Ms Chen, who is jobless, first met while drinking with friends in December 2015.

On April 8 the following year, Mr Koh was visiting her apartment at The Parc Condominium in West Coast Walk when Lim's son entered the unit with another man, whom Ms Chen identified on Tuesday as "Ron" - the businessman's nephew.

The court heard that Ron attacked Mr Koh but the latter did not retaliate. The waiter added: "I'm not a violent person. I was covering my head all the time."

The attack lasted about 15 minutes. After that, Mr Koh said that the two men took photos of him on their mobile phones. He was later taken to hospital by ambulance and treated for injuries including a broken nose.

Three weeks later he was attacked a second time as the couple were about to eat supper near Little India. He was slashed in the face by Nur Muhammad Irwan Mohd Ngat, suffering injuries including a wound which ran from his left upper lip to the right side of his chin.

However, Mr Koh said that he had only one direct encounter with Lim which took place near his father's home in September 2016.

He was with Ms Chen when he spotted Lim driving around the neighbourhood in his car. Mr Koh added that she was talking to Lim on the phone when he got irritated and snatched it from her. Mr Koh testified: "I told him, if you want to talk, come, don't keep circling."

The court heard that Lim then drove away.

Related Stories
Two-timing beauty queen agreed to move into condo with married man as it was Hello Kitty-Themed
Two-timing beauty queen's BF slashed by 'hitman' who allegedly said: "I was sent here to kill you"
Man slashed in the face over rivalry for woman's love near Little India eatery
More About:
assault
attack
court
violent
dating
beauty queen