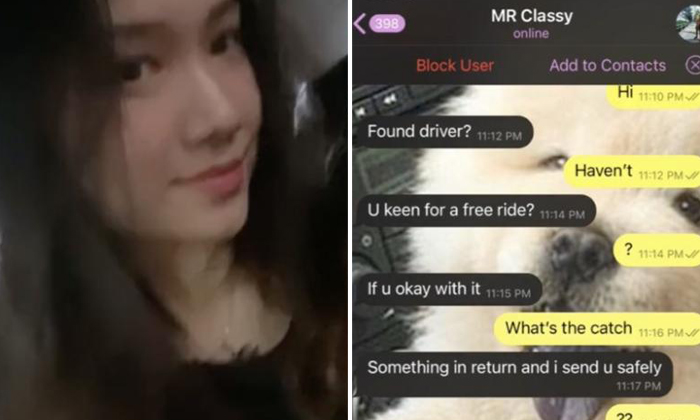 She suspected something was up when she received an offer to be picked up and driven home for free.

True enough, the offer from a “Mr Classy” came with a salacious caveat.

Speaking to AsiaOne, the 21-year-old student named Joie, said she was stuck at Mount Faber on Monday (Nov 7) around 11pm, and could not get a ride home to Sengkang through a regular ride-hailing app.

So she sent a request on a popular carpooling chat group, and received a private message from a "Mr Classy", offering a free ride.

In a now-deleted TikTok video shared on Tuesday (Nov 8) that documented her messages with the hitch driver, Mr Classy replied: "Something in return and I (will) send you safely."

When Joie pressed further, Mr Classy suggested receiving a sexual act from her in exchange.

"I knew that was coming… because nothing is for free and I've heard many stories of pervert hitch drivers," Joie said, adding that she blocked the hitch driver and took a Grab ride home.

This isn't the first account of a private hitch driver attempting to make seedy deals with young women.

In May, a woman shared a TikTok video on how one such driver offered her a free ride in exchange for a hook-up.

Related Stories
Woman gets text from hitch driver asking to hook up, saying he gets aroused by her pics
Police looking into Telegram groups sharing explicit content: 'This is the new SG Nasi Lemak'
Influencer accused of doxxing men says she did not mean to create ‘name-and-shame’ group
More About:
telegram
TikTok
lewd