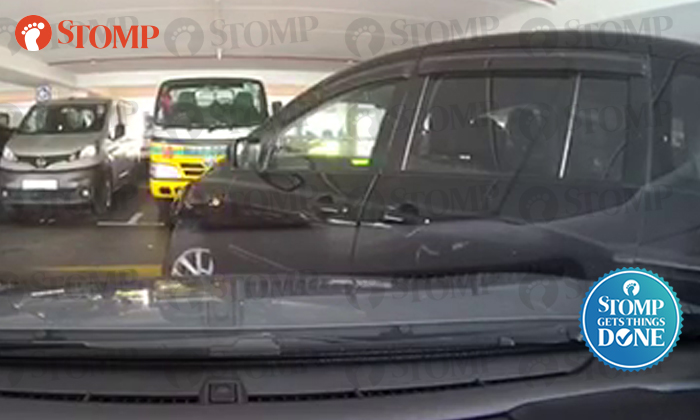 A female driver involved in a hit-and-run accident at Sunshine Place on Sep 24 is believed to have come forward to report the incident to authorities, therefore facilitating the victim's insurance claims, after Stomp published a video of the collision.

Stomper Anonymous, whose car was damaged in the incident, said the incident occurred at the shopping mall in Choa Chu Kang at around 1pm.

In a video published by Stomp on Sep 28, a woman in a black MPV is seen maneuvering her vehicle back and forth a parking lot.

Her car hit the Stomper's vehicle at least twice.

Anonymous told Stomp: "I don't know how much the car repairs will cost yet because I'm still waiting for the woman to report the incident.

"She has to report it within 14 days or else I'll have to pay for it myself first and it's very inconvenient."

He also said that the female driver did not leave any note or contact number.

In response to Stomp's queries, the police had confirmed a report was lodged and investigations are ongoing.

On Tuesday (Oct 2), Anonymous' friend, Stomper AQ, informed Stomp: "The culprit has just reported the accident to the relevant authorities.

AQ also said she believes it was the Stomp article that spurred the female driver into action, as the video was not shared anywhere else.

"Thanks for the help!" she added.

Related Stories
Woman hits car at Sunshine Place carpark -- then drives off without leaving a note or contact number
Videos show man examining damage on car after lorry hits it -- before fleeing
Driver looking for hit-and-run culprit who damaged his car along PIE
More About:
accident
damage
hit-and-run
Stomp gets things done