Hit-and-run driver knocks down motorcyclist, involved in another accident with 2 other cars 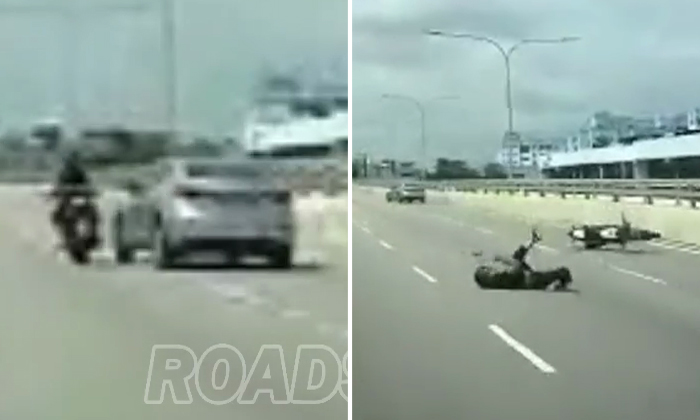 A Mazda driver who was caught on camera hitting a motorcyclist and not stopping after the accident was also involved in a second accident involving two other cars.

The first collision occurred along Bartley Road East on December 11, at around 11.28am.

A video posted by Facebook page Roads.sg shows the car driver travelling at high speed and not keeping to a single lane before hitting the motorcyclist.

The motorcyclist is seen getting knocked off her bike and sent rolling on the road.

"The Mazda driver did not stop to help the victim and continued to speed away," the video caption added.

"(The driver who captured the video) gave chase and towards the end of the viaduct, the Mazda driver hit another two other vehicles near Maris Stella High School.

"(The driver who captured the video) then called for the ambulance and took pictures of the accident vehicles before leaving the accident area."

In response to a Stomp query, the police said they were alerted to the accident along Bartley Road East towards Bartley Road before Kaki Bukit Avenue 4 at around 11.35am.

They added: "A 25-year-old female motorcyclist was conscious when conveyed to the hospital.

"Preliminary investigations revealed that the car involved in the first accident was allegedly involved in a second accident involving two other cars along Bartley Road towards Braddell Road."

No injuries were reported in the second accident.