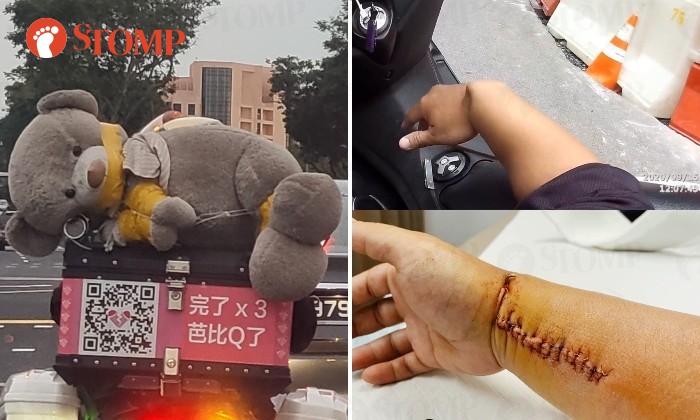 When she and her husband spotted the giant teddy bear bound and gagged on the back of a motorcycle at Bishan Road on Sept 11, Stomper Cy thought it was hilarious.

She said the bear seemed to be "abducted".

Below it was a pink sign with a QR code and the Chinese lyrics from a song about being finished and barbecued, which is popular with TikTokers.

Sharing a photo of the oversized plushy, Cy said: "Just sending it in because we thought it was hilarious, especially with the 'barbecue' TikTokers. The poor bear was being tied up and plastered." 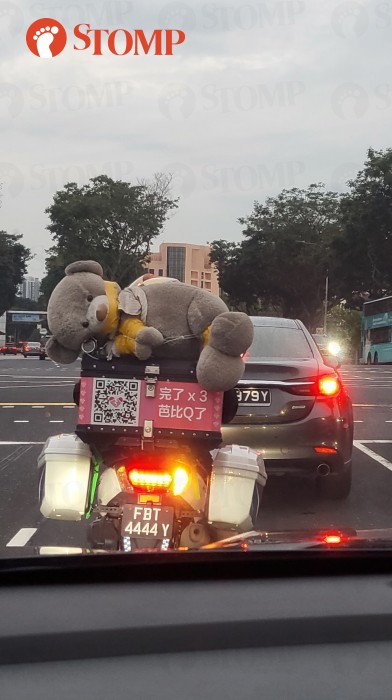 But why was the bear being "abducted"?

Scanning the QR code takes you to the website of Heartbreak Melts Ice Cream Cafe in Ang Mo Kio.

One of the cafe's co-owners is Goh Yong Wei, who was previously featured on Stomp in 2017 as the Singapore guy who made his own presentation slides to win the heart of a funeral undertaker.

When contacted by Stomp, he revealed that he was the GrabFood delivery rider whose motorcycle the teddy bear was photographed on.

"If you would like to know more and save Teddy, please contact my partner Mabel," he said.

Is this turning into a hostage negotiation?

In response to a Stomp query, the cafe's other co-owner Mabel Yee said: "Teddy is being punished for eating all the ice cream we make."

Mabel explained that Teddy is on Yong Wei's bike for safety reasons.

She said: "In 2020, Yong Wei had one accident every month until Sept 15 that year when a head-on collision resulted in his right arm getting very badly broken."

The lyrics from the barbecue song on the sign mentioned earlier are an inside joke and a reference to the accident.

"At the time, he was really finished," recalled Mabel. "His hand looked like a broken chicken wing." 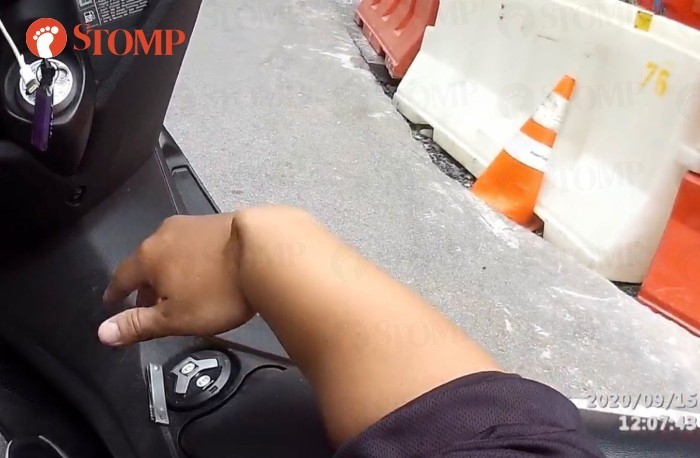 Perhaps he should change his motorcycle plate number, which is 4444.

She told Stomp that the accident is still under investigation and Yong Wei rode with only a "puny puny" teddy bear on the back of his bike back then. 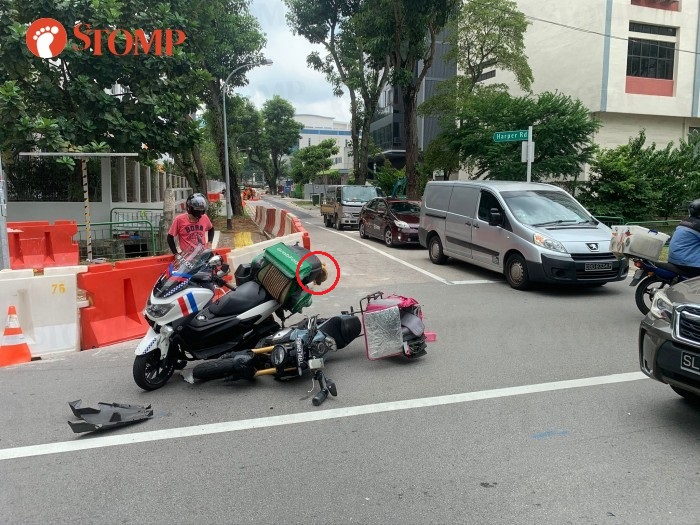 "Not effective enough. So having Teddy there helps get other drivers' attention. Since kidnapping Teddy all over Singapore, Yong Wei has been in only one accident in the past year and a few 'almosts', but they all spotted Teddy in time.

"Guardian Teddy protects Yong Wei from accidents like how your teddy bear in your bed protects you from nightmares."

Mabel said that after Yong Wei's 2020 accident, they explored alternative income sources and opened the vegan-friendly ice cream cafe in February this year.

And besides being a safety measure, Teddy has also become a marketing tool for the cafe.

"We figured since people were taking photos and videos of Teddy anyway, the QR code helps us generate traffic to our business," said Mabel.