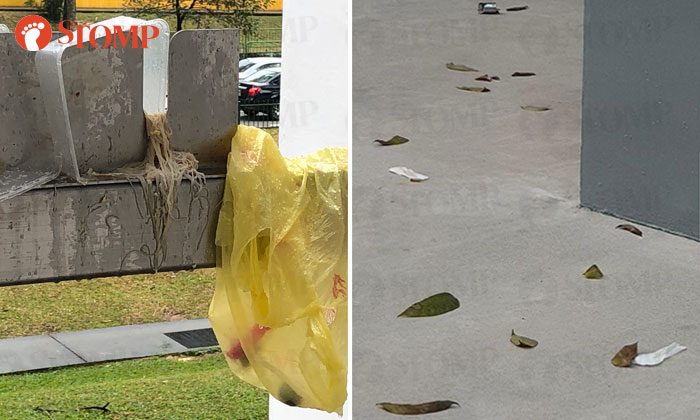 Residents have had enough with neighbours who throw litter down from their units instead of disposing of them the correct way.

Stomp reported on Tuesday on how a resident at the block cannot even use the poles hanging outside her home because food and waste thrown from a higher floor keeps getting stuck on them.

Stomper Gladys said that she has been dealing with the situation for about a year.

She said: "We understand the littering pattern has been ongoing.

"Town Council was first alerted to high rise littering issues in this block in June 2019.

"Town Council had assisted to clear away the items from the laundry pole and common areas.

"As high-rise littering is enforced by the National Environment Agency (NEA), we have once again alerted our agency partners to urgently look into this issue.

"Town Council had also served advisory notices to remind residents to be considerate to other residents.

"She understands that NEA's CCTV are generally put up for five days.

"Many offenders notice them and simply don't litter for those few days.

"She will also be working closely with NEA to nab the offender.

"We would also like to use this platform to remind all residents to refrain from high rise littering for the safety of the public."

Following a Stomp report last month, Sembawang Town Council identified and spoke to a resident at Block 439 Yishun Avenue 11 who had allegedly been throwing soiled sanitary pads out of a window on multiple occasions.

In Parliament, Dr Lee asked about the possibility of using DNA to nab offenders who throw this peculiar form of high-rise litter, reports The Straits Times.

"There were several high-rise littering of sanitary pads for many years and until today, it is still not solved. And why? Because NEA deploys CCTV for only a few days. And the problem persists," she said.

"Actually, if you have targeted an ambition to catch the culprit, I'm sure we'll be able to catch (him or her). Otherwise, it looks like this problem will disappear only when the litterbug (enters) menopause."