Hey girl, no bus is worth risking your life to catch! 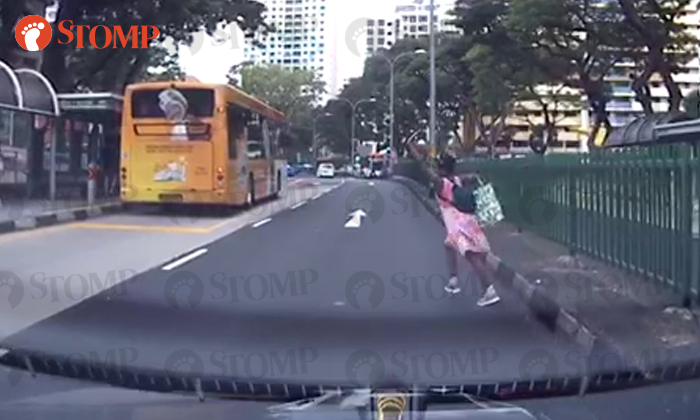 A young girl was caught on camera dashing across a busy road and trying to sprint past oncoming vehicles -- all to catch a bus.

Mattsng, who contributed dashboard footage of the harrowing sight, said: "This little girl beat the red light to chase for her bus.

"Both the bus beside me and I had to stop for her to cross the road.

"I got a shock as I had to stop and let her cross while worrying about the traffic behind as I had stopped suddenly.

"Also, I didn't see any adult with her at all."

In the video, the girl can first be seen dashing across the road and reaching the central road divider.

She then runs along the central road divider while making multiple attempts to cross the road.

Mattsng and an SBS Transit bus on his left can be seen stopping to let the girl go past, allowing her to run to the bus stop.

Related Stories
Close shave for schoolgirls who dashed across road during red light in Bishan
Female jaywalker sent flying after dashing across Balestier Road and getting hit by car
3-year-old boy who got run over by car at Depot Walk in stable condition, police investigating
More About:
dangerous
child
jaywalk
jaywalking