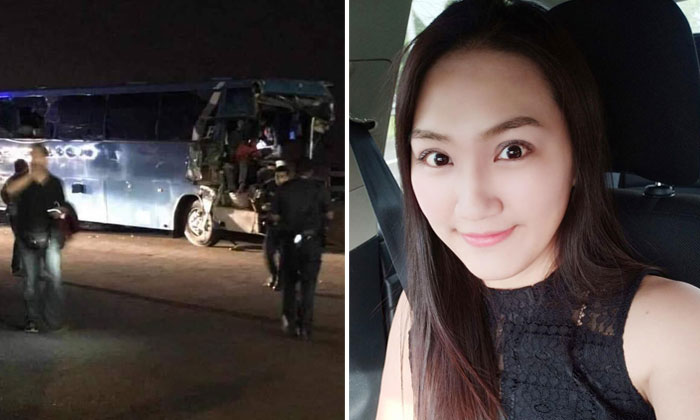 The 35-year-old woman who died in a bus accident near the Tuas Checkpoint on Tuesday morning (Feb 26) was an employee of Hewlett-Packard (HP), the technology company confirmed on Wednesday.

Ms Mok Fei Chen, a Malaysian citizen, was also known as a 'super mum' who often posted photos of her family on Facebook.

Ms Mok was killed after the bus she was in collided into the railings near the checkpoint at about 4am.

The impact sent her and another woman flying out of the bus and onto the ground.

The Singapore Civil Defence Force (SCDF) found the two women at the foot of the flyover. Ms Mok was pronounced dead at the scene while the other woman was taken to hospital with serious injuries.

Fifteen other people, including her husband and some HP employees, were injured in the accident.

According to The Straits Times, an HP spokesman said in a statement on Wednesday (Feb 27): "We are deeply saddened to confirm that an HP employee passed away yesterday in a traffic accident."

The spokesman added that most of the other employees who required medical treatment have been discharged from hospital.

"Our focus is on supporting our colleagues and their families in this difficult time," the spokesman said.

"The safety of all employees is our highest priority and we continue to work with our transportation vendor to ensure safety of the vehicles."

Ms Mok and her husband, who are from Johor Baru, were believed to be on the way to work when the accident happened.

According to Ms Mok's Facebook page, the couple have two daughters, aged eight and 10 years old.

She would often upload photos of the whole family together celebrating special occasions including birthdays and holidays like Christmas.

One of the photo collages she posted showed the family of four wearing identical black T-shirts with the Superman logo on it while on vacation.

"Super Family" was captioned on the photo.

Ms Mok's friends and relatives are in mourning following news of her death and some posted tributes to her on social media.

"We will remember you forever," one friend wrote.

Lianhe Wanbao reported on Wednesday that Ms Mok's husband and three relatives arrived at the mortuary in a Malaysia-registered car at about 10am.

The four of them spoke to an investigation officer for about 10 minutes before they left.

The police have arrested the 59-year-old bus driver for causing death by rash act.