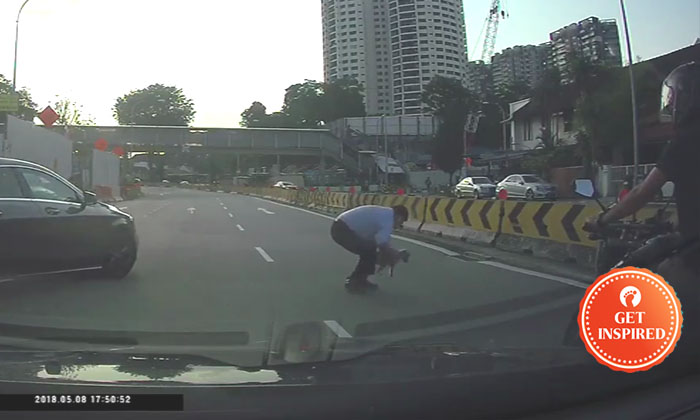 While motorists attempted to avoid a wandering puppy along Upper Thomson Road, one man took it upon himself to rescue the doggy in distress.

In a video posted by Facebook user Sunita Parhar, a tiny puppy could be seen walking in the middle of two lanes, while trying to avoid oncoming vehicles coming from both sides.

Many cars could be seen decreasing their speed as they approached the puppy.

Ms Parhar said: "We were driving down Upper Thomson Road and this poor puppy was running in the middle of the road."

"We were wondering how to help him when a really kind man stepped out and picked him up.

Upon noticing the puppy, a pedestrian standing on the side of the road then rushed out to scoop the puppy into his arms.

Has your faith in mankind been restored?

Related Stories
Workers who rushed to aid AMK accident victims lauded by SCDF
'We can't lose him': Family of 5's world turned upside down after man gets cancer
Chengdu woman takes 'wedding photos' with ailing grandpa -- so that he won't miss her big day
More About:
dog
heartwarming
kind