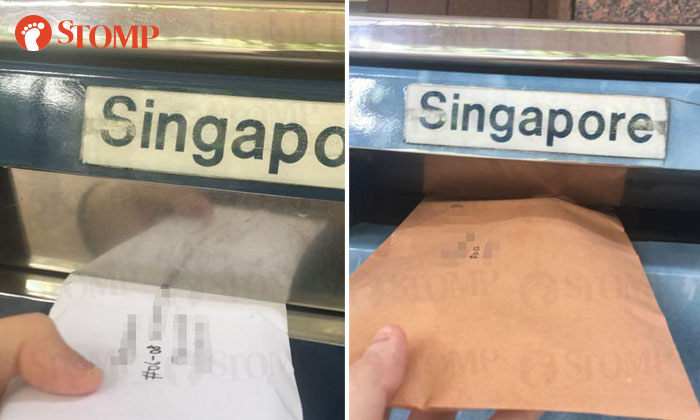 Stomper K did not get back two letters that she sent out to the wrong address despite including a return address on the envelopes.

She said she had written the wrong addresses on two envelopes, which she posted on Aug 27 and Oct 1 to separate recipients.

The two addresses apparently did not exist, said K, who had included her postal code and unit number on the back of the envelopes.

K then contacted SingPost, who said that the mail would be automatically returned to the sender since the recipients' addresses do not exist.

The Stomper waited for a week or so but did not receive the mail.

She was enquiring about another issue with SingPost in September and mentioned that she still had yet to get back her letter sent on Aug 27.

On Oct 13, SingPost messaged K and informed her that they tried contacting her, but she said that she did not see their call.

On Oct 15, K said SingPost called and this time, she spoke to a staff member on the phone.

However, K said that she did not receive the email.

She waited one week before emailing SingPost on Oct 23.

She was asked to provide a case number, which she did not receive on Oct 15.

In response to a Stomp query, a SingPost spokesman said: "We thank Stomper K for her feedback and apologise for the inconvenience caused.

"The packages she sent bore invalid addresses and in this circumstance, they would have been returned to the sender as a return address was provided.

"As ordinary mail is not tracked, we are unable to ascertain where the packages have gone. We have searched through our delivery base and Returned Letters Unit. Unfortunately, we have not been able to locate them.

"We are sorry Stomper K did not receive a response to her query sooner. As it turned out, our messages did not reach her as her email address was not relayed to us accurately.

"The address is critical in the mail delivery process and we would like to take the opportunity to remind the public to provide recipient and return addresses that are accurate and complete."

Related Stories
SingPost apologises and compensates man $68 for lost silver coins worth $180 delivered from the UK
SingPost responds to Ang Mo Kio family allegedly missing some of their mail since May 2018
SingPost responds to case of parcel crammed into Sengkang letterbox
More About:
SingPost