Here's why man got charged $91.20 for 2 plates of kai lan at Crystal Jade restaurant 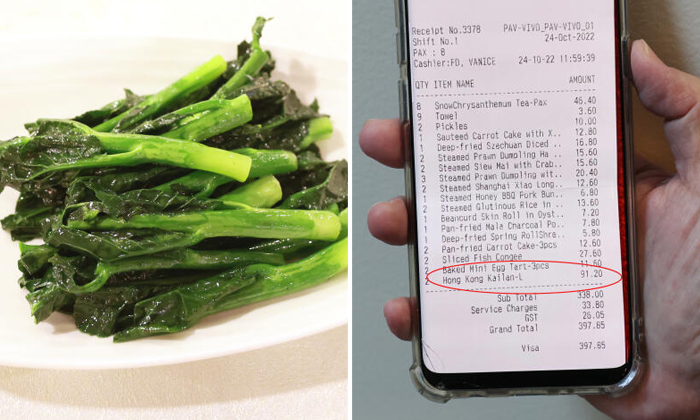 When you order economy rice, vegetable dishes are usually the least expensive item and a safer bet than meat or seafood, right?

A man dining at a restaurant in VivoCity, however, was taken aback when he was charged $91.20 for two sets of Hong Kong kai lan. It was also the most expensive item on his bill. 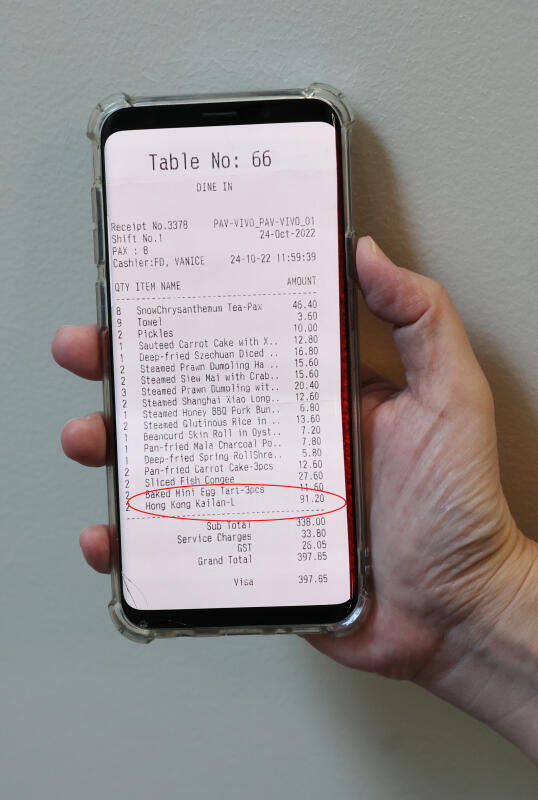 The group consisted of six to seven adults and two children.

Mr Lin recounted: "During the meal, I ordered stir-fried Hong Kong kailan in oyster sauce. The waiter suggested getting a large portion for our group size."

When settling the bill, Mr Lin was not expecting to be charged $91.20 for two plates of kai lan. This meant that each set came up to $45.60 before service charge and GST.

Mr Lin checked with the cashier and was told that the pricing was correct.

He noted that a regular portion of kai lan for two to three pax was priced at $22.80 on the menu and did not understand why a large portion cost twice as much.

Mr Lin added: "I work in the food industry myself and usually pay attention to the price of food. I understand that the prices of vegetables have risen, but I was still shocked when I got the bill.

"If the waiter had told me that the large portion costs the same price as two regular portions, I would probably would have ordered only two of the latter."

Mr Lin said that the restaurant had only listed one price on its menu and that diners would not expect the large portion to cost double. 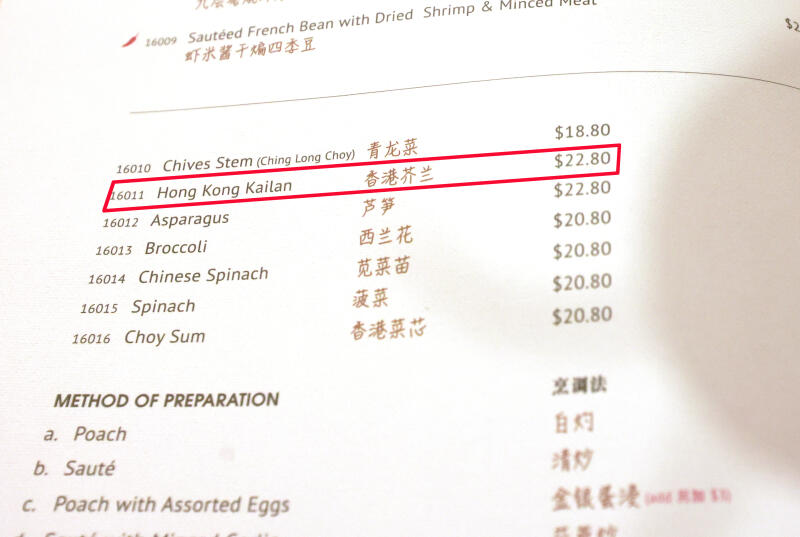 After Mr Lin emailed the restaurant's customer service about the matter, he was told that dishes are calculated based on headcount and that regular portions are normally for two to three diners.

But as a regular customer was at their table, the wait staff had ordered a large portion of kai lan according to that customer's usual preferences.

In their email response to Mr Lin, the restaurant apologised for the incident and said: "Our team should not have made an order without informing customers about the price or taken the initiative to order a large portion of the dish. They should have been more mindful when taking orders.

"We will continue to remind the team to confirm portion sizes when taking orders for large groups, so as to avoid unpleasantness and miscommunication."

Mr Lin said that he has been eating out during the festive season for the past ten years but has never encountered such issues.

However, other restaurant operators that Shin Min spoke to said that staff are not obliged to inform diners about the cost of each dish as most prices are already displayed on the menu. Regular customers also typically do not ask about the cost even for seasonal dishes without displayed prices.

One restaurant manager said that informing customers of prices on the spot is not a practice at high-end dining establishments. It might even offend or embarrass diners, or cause them to 'lose face' in front of their guests.

The manager further noted that not only is Hong Kong kai lan pricier than the local variety, it is also more complicated to prepare. As such, the dish is generally only available at mid-to-high-end restaurants.

Another advised diners to ask about the price before ordering if they are worried about unknown charges, adding that it is nothing to be ashamed about.