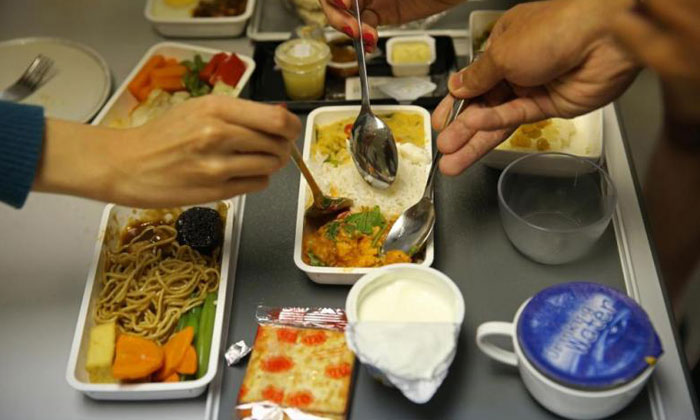 Ever wondered why in-flight meals taste different from what you are used to on the ground?

That is because at 30,000 feet in the air, your taste buds and sense of smell are the first things to go.

As the plane gets higher, both the air pressure and humidity levels in the cabin go down.

In aircraft cabins, the humidity is usually less than 20 per cent. In homes, it is usually more than 30 per cent.

Professor Zhou Weibiao, director of the National University of Singapore's (NUS) food science and technology programme, said: "Our smells and tastes change due to different environmental pressure and relative humidity in the plane up in the air. Noise and vibration might also affect them a bit."

A 2010 study conducted by Germany's Fraunhofer Institute for Building Physics - commissioned by German airline Lufthansa - found that the combination of dryness and low pressure reduces the sensitivity of taste buds to sweet and salty foods by around 30 per cent.

Lower humidity levels mean there is less moisture in the throat, which also slows the transport of odours to the brain's smell and taste receptors, said researchers.

It is like having a cold, said the Lufthansa-backed research team leader Florian Mayer. Your nasal mucous swells up when you have a cold, and that reduces odour and taste perception.

Now psychologists have also found evidence on how background noise in the plane can affect the taste of food.

A 2015 study by Cornell University's Food and Brand Lab showed that one's perception of taste changes in an airplane cabin which has a routine background noise of more than 85 decibels.

The plane vibrations stimulate a nerve in the middle ear, which makes the intensity of sweet flavours "progressively lower".

To deal with the altered taste buds, airlines have come up with interesting solutions.

It could be a semantic match, like Scottish music for Scottish fish, or synaesthetic matches to up sweetness. Synaesthesia evokes sensations through the stimulation of a different sense.

Airline chefs also load up on the seasoning to make food less bland.

Adding more salt and sugar to make up for the muting of taste buds in the air, however, would make the meals less healthy.

But Prof Zhou said: "Unless people have in-flight meals very frequently, a few meals in a month that are a little heavier won't cause major concern."

Curries, for instance, tend to survive well and have more moisture than most foods.

Some airline chefs also come up with menus rich in umami, which is unaffected by altitude.

This is why many in-flight menus feature dishes with mushrooms, tomatoes and soya sauce-based glazes.

In-flight catering provider Sats, which Singapore Airlines works with, has a simulated aircraft cabin in their in-flight catering centre at Changi Airport, which is where meals are cooked and tested under low-pressure conditions.

Many in-flight dishes have been developed by the airline based on research in this facility.

Wines, too, taste different on a flight - again, thanks to our taste buds.

Related Stories
If this cool biker bro in black flashes his blinkers, you better stop
Tough children's questions that might baffle even the smartest of adults
Here's what happens when you make a report against errant drivers at HDB carparks
More About:
food
plane
trivia
flight
interesting