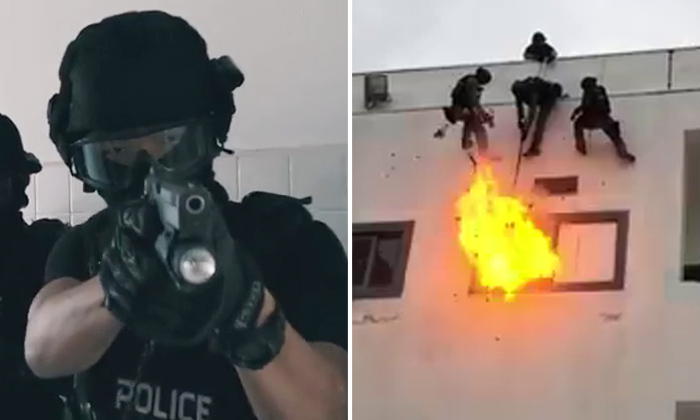 To the average person, repeatedly running up and down a 10-storey building while carrying 50kg of weights might sound like a ton of hardship.

However, this is just part of the training that Special Tactics and Rescue (STAR) officers go through in order to ensure that they are in top form at all times.

A video posted by the Singapore Police Force (SPF) on Wednesday (Feb 27) gives a glimpse into what it is like to be part of the elite team, whose identities and work are never disclosed to the public so as to prevent missions from being compromised.

Trainees undergo an arduous eight-month selection and training course, where they are pushed to the brink of their physical and mental limits.

According to the Facebook video, only 10 per cent of trainees make it through the course.

STAR officers are then assigned specialised roles of assaulter, sniper or assault diver -- each accompanied by its own set of challenges.

Some are also trained to make explosives for use in breaching operations.

In 2016, STAR responded to two separate hostage situations in Ang Mo Kio and Sembawang, involving a 71-year-old woman and a two-year-old boy who were locked in respectively.

These stand-offs, both of which lasted for 16 to 17 hours, are proof of how STAR's specialised capabilities provide the SPF with the highest level of tactical armed response.

And as cliche as it sounds, teamwork and camaraderie are some of STAR's most important elements.

Said a STAR officer in the video: "We know we have each other's backs. We trust each other with our lives to accomplish our missions."