Here's what not to do when you encounter a monitor lizard 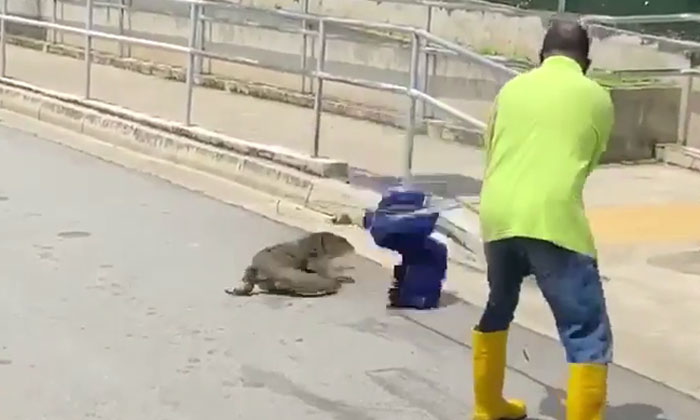 Workers were seen trying to chase away a monitor lizard that had ventured a little too far from its natural habitat.

Stomp was alerted to the video that was posted on All Singapore Stuff's Facebook page. It is unclear where or when the incident happened.

In the footage, a worker is seen using a mop to guide the lizard out of the area.

The reptile appears to be scared and repeatedly nips at the mop and is seen thrashing its tail.

It appears to be injured.

Netizens praised the workers for trying to help guide the monitor lizard out of danger but said that professionals like the Animal Concerns Research and Education Society (Acres) should have been called in to handle the situation.

"The animal in this video is a water monitor lizard.

"They are common islandwide and relatively shy.

"We will like to show our appreciation to the person for taking his time to slowly nudge the animal away.

"However, we will like to urge the public not to attempt this on their own as the animal can become defensive as in the video.

"This may cause the animal to be unpredictable causing it to sometimes dash erratically which might be a potential for accidents especially if there is a road nearby."

NParks advises the public to do the following should they encounter a monitor lizard:

Related Stories
Monitor lizard goes jalan jalan in Yishun, gets stopped from entering Wisteria Mall
Monitor lizard digs around in Botanic Gardens: 'It's so cute!'
The most chill 'jaywalker' you will ever meet in Yishun
More About:
monitor lizard
wild animals
wildlife
acres
NParks