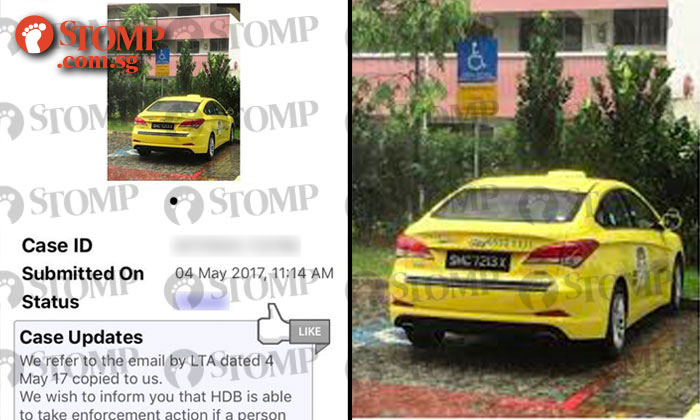 HDB has responded to a Stomp query with regard to actions that will be taken after a report is made against errant drivers.

Stomp first reached out to HDB after Stomper Janet informed us she was told that she might have to testify in court after making a report about a cabby who illegally parked a taxi in a disabled parking lot in Jurong.

In a telephone interview, she said that she was surprised after reading that she might have to go to court.

According to a HDB spokesperson however, such a course of action is not abnormal.

Responding to a Stomp query, the spokesperson said:

"HDB carries out regular car park enforcement action in HDB estates. Upon receiving reports of illegal parking, including cases of unauthorised parking in lots for the handicapped, checks will be conducted, and errant motorists will be issued with a parking offence notice. Depending on the severity of the offence, recalcitrant motorists could face a fine of up to $2,000 per offence

"There could be instances where the motorist and/or vehicle in question is not or no longer at the location of the alleged offence that was reported, at the time that the checks are being carried out.  In such instances, enforcement action can only proceed if the feedback contributor agrees to testify as a witness in court in the event that the motorist claims trial or disputes the parking offence. This is a legal requirement.

"In the Jurong case mentioned by the STOMP contributor, the vehicle in question was no longer at the location of the alleged offence during our checks.  Hence, we had contacted the contributor to seek her agreement to testify as a witness in court, in the event the motorist claims trial or disputes the parking offence.

"We urge all motorists to be considerate and abide by the parking rules, so as not to cause inconvenience to others. Members of the public who come across illegal parking at HDB car parks can call HDB’s Car Park Enforcement hotline at 1800-2721409."