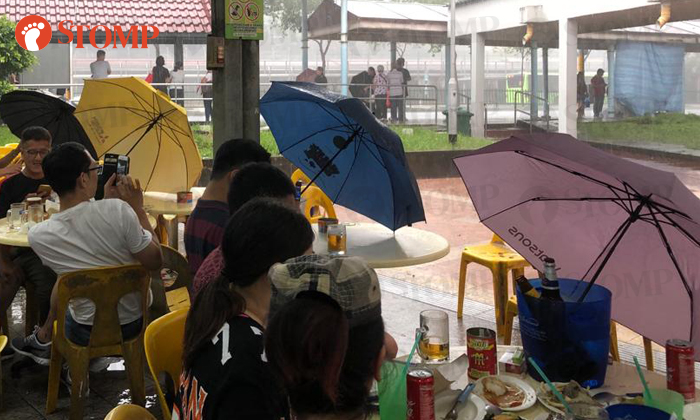 A sudden downpour might send people scurrying for shelter and keep them indoors, putting a blip on their plans for the day.

Not for these patrons at a coffee shop located at Block 711 Ang Mo Kio Avenue 8, however, who chose to keep calm and carry on.

Stomper Don was amused when he saw how several umbrellas had been strategically placed on some tables to keep out the rain yesterday (Dec 23), at around 6.15pm.

But what stuck out to him was how the patrons, rather than shielding themselves, seemed to be trying to protect their drinks from the wet weather instead.

Don, who was visiting the coffee shop, told Stomp: "There was very heavy rain that lasted for around 40 minutes.

"I believe the patrons were the ones who placed the umbrellas there.

"Many of the beer promoters were taking photos of the unique set-up.

"It’s interesting to see everyone using their umbrellas to shield their beers rather than themselves."