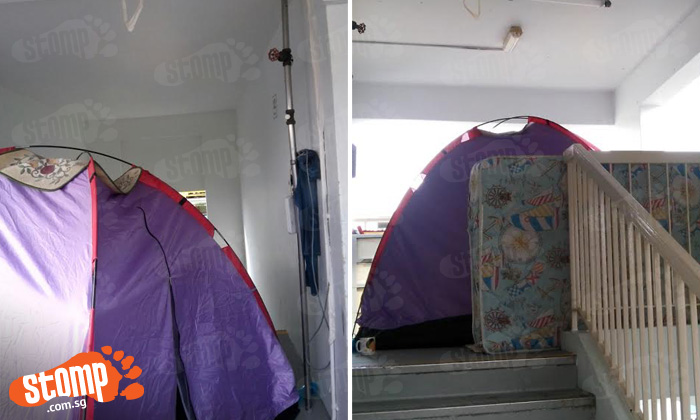 Stomper Anonymous' neighbours have set up a tent along the corridor of the Jalan Bukit Merah block he lives in and camped outside for more than a week.

According to the Stomper, his 12th-storey neighbours at Block 105 Jalan Bukit Merah even installed their own lights and fans.

In the photos he said are taken by his neighbours, a purple tent and a mattress can be seen. The wiring of the block had also been tampered with, presumably during their light and fan installation.

"They have been there for more than a week. They are always sleeping outside their house.

"Neighbours walk past but they cannot do anything."

When asked if they had been confronted for setting up camp in the common walkway, the Stomper said it was 'no use'.

The Stomper wants to add that they are not kids camping, but grown men and women sleeping outside the flat.