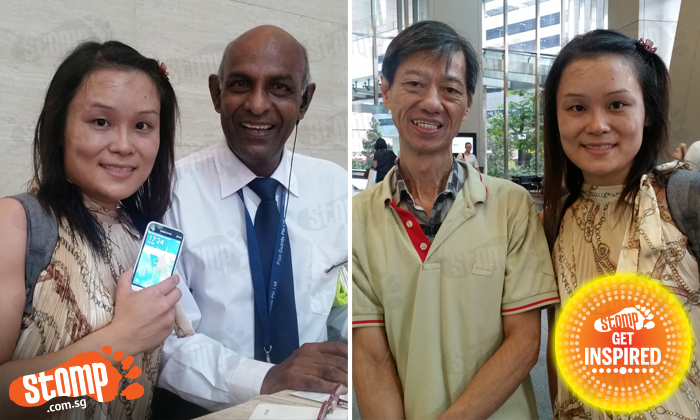 Stomper Christina is eternally grateful to the two men who helped reunite with her Samsung phone, which she had initially lost, at One Raffles Quay yesterday (May 19).

They are a security guard at the building and an employee from the 7-Eleven outlet there.

She had initially faced some difficulty in finding the relevant departments who could assist her, after accidentally leaving her phone behind in the female toilet beside the 7-Eleven store and then returning to find it gone.

Christina, whose phone was lost for more than 20 minutes, recounted what happened:

"Eventually, I reached the ladies located besides 7-Eleven. An uncle works there. I asked for his help and whether any of his staff had seen my handphone left inside the ladies, after I found that my handphone was no longer there.

"When he spoke to me, I was already heartbroken at that time but this 7-Eleven uncle, whose name is Mr Tan, told me this: 'Girl,don't be so kancheong.'

"I couldn't calm myself down as my sweet memories (pictures and videos) are inside the phone, and I have not saved them in my own personal computer.

"Then after I left his store for less than five minutes, he gave me a call and asked me to go back to the same toilet, and said his staff had found it. At that instant, I was euphoric!

"Uncle Tan directed me to One Raffles Quay's information counter to speak with the customer service officers (both are Malay, one pretty young lady and one handsome young gentleman), who also tried to calm me down as I looked very pale even though my phone had been found.

"An Indian security guard then returned it to me after I signed on it. I asked for his name and it was Mr Siva.

"I thanked them and asked for their pictures. The One Raffles Quay information counter staff helped us to take pictures as I wanted to express my gratitude online.

"Thank you, Uncles Tan and Siva! I will remember you two dearly!"