Hearse skids and collides with car along Mandai Road, two taken to hospital 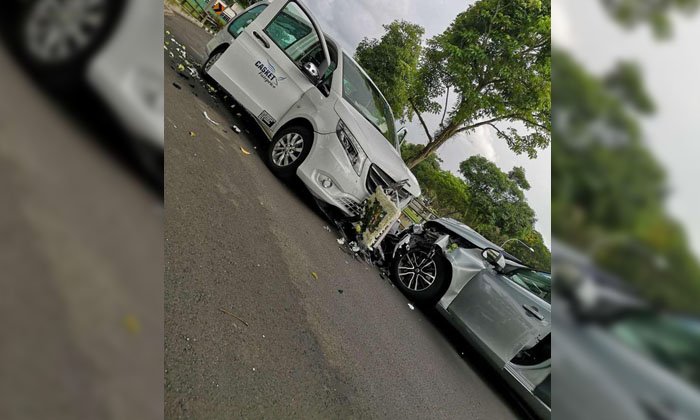 A video of the accident has emerged.

Two people were taken to hospital after a van skidded and collided with an oncoming car along Mandai Road on Jan 8.

In response to a Stomp query, the police said: "On Jan 8 at 3.34pm, the police were alerted to an accident involving a car and a van along Mandai Road towards Mandai Avenue 1.

"Two people, aged 30 and 32, were both conscious when conveyed to Khoo Teck Puat Hospital."

Stomp understands that the van had self-skidded into the next lane, encroaching on the right of way of the silver car, thus leading to the accident.

Stompers Ah Boy, Robert and Anil Shah alerted Stomp to pictures of the accident that have been circulating on social media.

The pictures show the aftermath of the collision between the Casket Fairprice van and the silver car.

The front part of the van is badly damaged, while the silver car's hood appears to be dented in.

Flowers from a smashed picture frame lying in between two of the vehicles can be seen scattered by the side of the van.

When contacted by Stomp, Casket Fairprice declined to comment on the incident.