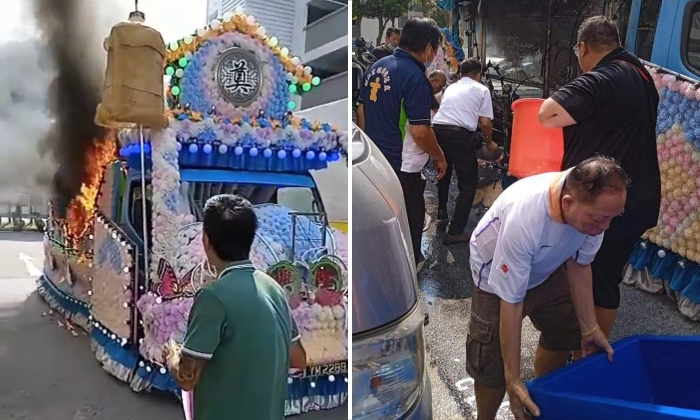 A hearse caught fire in Woodlands on National Day and the fire was put out by members of the public with pails of water before the arrival of the Singapore Civil Defence Force (SCDF).

The hearse, which was a lorry ornately decorated with blinking lights and a traditional Chinese roof in the back, was empty at the time of the fire.

Multiple videos of the video were posted online. In one, smoke was billowing from the vehicle in the car park next to a tent at the foot of an HDB block. Traditional Chinese music can be heard at first but stopped when the smoke started to fill the area.

Other videos show the vehicle being driven away after the fire was put out. It appeared that only the back of the vehicle was damaged by the flames.

The aftermath of the fire.

A witness told The Straits Times that it was all over in 10 minutes and a smaller hearse arrived later for the funeral procession.

In response to a Stomp query, SCDF said that it was alerted to a fire at a car park near Block 313 Woodlands Street 13 on Aug 9 at about 3.50pm.

"The fire involved contents of a lorry. Members of the public extinguished the fire using buckets of water prior to SCDF's arrival," said SCDF.