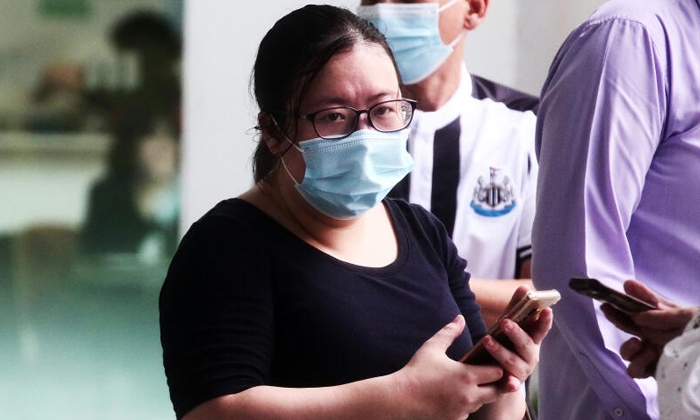 In order to circumvent contact-tracing efforts while serving a leave of absence, a healthcare worker used her 12-year-old niece's TraceTogether token to enter public places to get food and borrow library books.

On Monday (April 25), Priscilla Tan Siew Sin, 34, was fined $10,000 for cheating by personation. Two other similar charges were taken into consideration for her sentencing.

Tan did not have Covid-19 at the time.

The court heard that Tan, a patient service associate at the National Neuroscience Institute in Tan Tock Seng Hospital, on April 30 last year had been established as a contact of a doctor who tested positive for Covid-19, and was placed on a leave of absence.

She was allowed at the time to leave her place of residence for necessities such as to buy food.

However, Tan was concerned about getting into trouble for leaving the house if she was found to have contracted Covid-19 or if she came into contact with someone else who had the virus, said Deputy Public Prosecutor Wu Yu Jie.

With her swab result still pending on April 30 last year, Tan used her niece's TraceTogether token to buy dinner from The Poiz Centre in Upper Serangoon.

She also used her niece's token on May 2 that year at the library@esplanade to borrow books and later at Marina Square to get dinner.

Tan's lawyers, Ms Joyce Khoo and Ms Diana Ngiam from Quahe Woo & Palmer, urged the court to impose a $5,000 fine, arguing that no actual harm was caused by Tan's actions.

Ms Khoo said the Covid-19 situation at the time was very confusing for many, and her client made the misguided decision to use her niece's TraceTogether token when she was allowed to use her own.

"It was a foolish mistake," she added.

DPP Wu accepted that Tan was allowed to leave her home but argued that she intended to circumvent contact tracing.

Calling for general deterrence to stop others from committing similar offences, DPP Wu said that the more people act this way, the less impactful the contact-tracing regime will be.

The defence also pleaded for leniency in the light of the easing of measures that comes into effect on Tuesday, including most venues no longer requiring check in with TraceTogether.

However, District Judge Ronald Gwee said one has to look at the time the offence was committed, and added that the Government has said that should the Covid-19 situation worsen, measures could be tightened again.

For cheating by personation, Tan could have been jailed for five years, fined, or both.