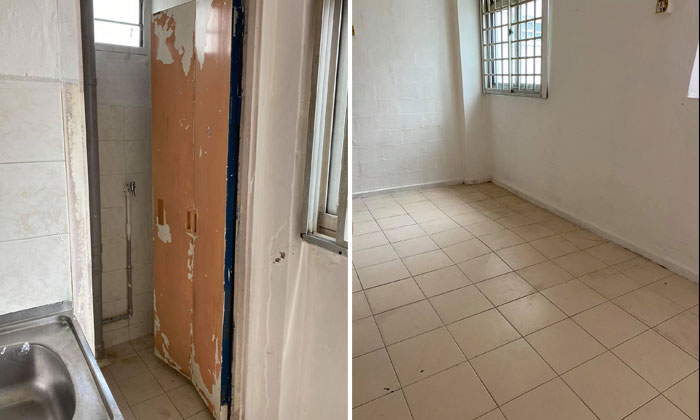 After paying $438.30 in rent and deposit for temporary accommodation in a Housing Board rental flat, a single mother was aghast when she opened the flat's door and saw its condition.

She wrote: "To my horror, after I collected the keys and entered, the rental flat from HDB looks like a horror movie scene."

Ms Ong, who has a 16-month-old baby, said there were exposed wires and electric sockets that were not working.

The tiles were cracked, the window grills were broken and rusty and the toilet - which did not have a light bulb - had a broken door, a mouldy basin, and a broken and cracked toilet bowl.

Ms Ong said the flat was in a non-liveable condition and more akin to a "haunted house".

"Every single cent to me counts as I am currently unemployed and trying to make ends meet," she said, adding that she lost her job in January this year and has been actively going for job interviews.

Ms Ong said she had to wait 11/2 years before she got the rental flat that was assigned to her and was concerned that its condition would prove dangerous for her baby and her.

Upon learning of her online post about the "poorly maintained" allocated abode, HDB clarified on Facebook that under its guidelines, arrangements are typically made to make the flat liveable before keys are issued, and that any damaged items will be repaired or replaced.

We are aware of an online post showing a poorly-maintained HDB rental flat allocated to a tenant and would like to...

Posted by Housing & Development Board on Thursday, April 15, 2021

"In this case, the keys to the rental flat were issued before HDB could arrange for the sprucing up of the flat," HDB added.

It contacted Ms Ong to apologise, issued her a replacement flat last Friday and assisted her in the move.

She posted an update on Facebook last Saturday: "I am deeply grateful that they took immediate action upon seeing my post and apologised for the mistake.

"I sincerely hope that no one will ever need to go through whatever I did again. The amount of distress was indescribable."

After being alerted to her first post by concerned grassroots leaders and some members of the public, Mr Zaqy Mohamad, the MP for Marsiling ward in Marsiling-Yew Tee GRC, wrote on Facebook last Friday that he and his team would be following up with her on her needs.

"I empathise with her situation," said Mr Zaqy, who is also the Senior Minister of State for Manpower and Defence.

"What should have been an occasion to feel happy and relieved, turned out to be otherwise."

He added: "I am heartened by HBD's quick response to provide Felicia and her child a proper environment to live in.

"We will provide relevant assistance to ensure she is supported as we welcome her into our Marsiling community."