HDB responds to Stomp about Yishun resident's ceiling leaks: He had asked contractor to drill holes 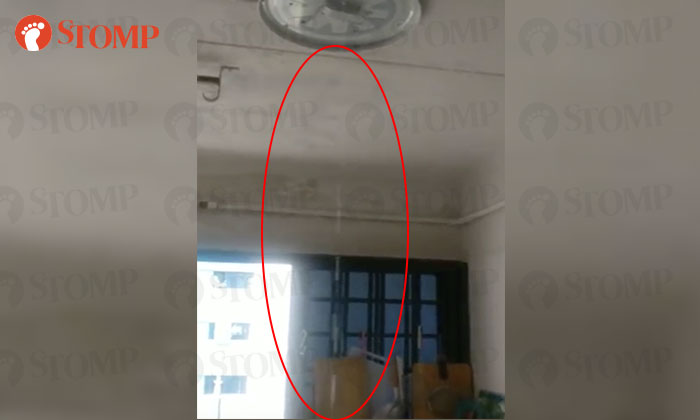 Stomper Lionel who stays at Block 130 Yishun Street 11, has been experiencing leaks from his kitchen ceiling about one month ago,  when the Home Improvement Programme (HIP) first started.

Lionel told Stomp that he contacted the Housing and Development Board (HDB) about the issue back in June.

According to Lionel, the leaks happened when it rained, and he had to continuously empty buckets of water.

“These leaks are very bad, especially now, during the rainy season.

“I have been staying with my parents for the past 35 years, but the leaks only happened after the recent upgrade.”

Lionel said that he later discovered that the ceiling of his living room was “hollow” when he asked an HIP contractor to assist him with changing the position of a ceiling light in the kitchen.

In response to a Stomp query, an HDB spokesman said:

“We have inspected the flat at Block 130 Yishun Street 11 to investigate the cause of the leak in the kitchen ceiling. We understand from the resident that water was leaking through one of three holes in the ceiling.

“The resident had requested our Home Improvement Programme (HIP) contractor to drill the three holes in his kitchen ceiling so that he could relocate his kitchen lights.

“Though this was not covered under the scope of HIP works, the contractor had acceded to his request out of goodwill.

“Based on our investigation, we have established that the ceiling leak in the resident’s kitchen could be due to water seeping in from the external wall of his kitchen.

“The water seepage could have resulted in water leaching into the ceiling and flowing through the drilled hole. The Nee Soon Town Council will be carrying out repairs to the external wall this month and the resident has been duly informed.

“We will monitor the situation and render the necessary assistance to the resident.“