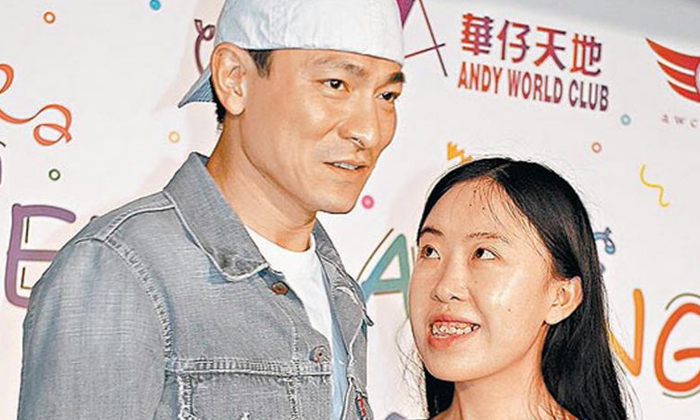 The father jumped into the sea in 2007, with his suicide intended to make Andy Lau guilty and force him to meet his daughter.

The man's daughter, Ms Yang Lijuan, was a big fan of the Hong Kong actor-singer.

Ms Yang, now 41, was so fixated with meeting her idol that her parents felt compelled to help her achieve her aim and give her happiness.

To pay for her trip to Hong Kong, her dad sold their house but his offer to sell his kidney to a hospital was rejected because it was illegal.

In March 2007, Ms Yang succeeded to get an invite to a Hong Kong fan club event to celebrate Lau's birthday.

She took a wefie with him but was devastated that she did not get to talk to him.

Her teacher-father, upset over what he perceived as Lau's indifference towards Ms Yang, took his life, after penning a 12-page letter.

In the letter, he pleaded with Lau to meet his daughter, even if their chat lasted five minutes.

Now, 12 years later, Ms Yang has told YouTube channel See You Later that she has got over her obsession with Lau, and is full of remorse over her dad's death.

She became infatuated with Lau when she was 16, collecting newspaper clippings and records.

Dropping out of school, she even vowed that she would not marry until she met Lau.

Ms Yang, who is now a sales promoter in her home town Lanzhou, said if she could rewind her life, she would not repeat what she had done in the past.

Ms Yang, who initially fended off accusations that she was responsible for her father's death, now recognises that she cannot run away from the truth.

Trying to make amends since, she turns up at a site beside the Yellow River every year during the Qing Ming Festival to offer prayers and respect, reported ETtoday.

A video shows her at the river saying: "Daughter knows. You sacrificed a lot for me. Mum and I are fine now.

"I know I have to work hard. I will take care of mum. You are the greatest father. Please forgive your daughter."

It has not been easy picking up the pieces after he died.

In 2009, she told an interviewer that they were fortunate to get some financial support from the Lanzhou authorities.

"I'm a filial daughter, my biggest wish is when I earn money by doing sales, I'll start a small business to support my mother and allow her to enjoy a better life," she said then.

"Even the sight of blue skies, green trees and birds makes me feel very grateful. I am glad God did not give up on me," she said, adding that she is at peace when she wakes up each day.

Lau also had to find closure after the 2007 tragedy.

Then, his agency said he would not meet Ms Yang privately, with the actor urging her to return to China and get on with her life.

Reports also emerged then that Lau was bombarded with more than 100 letters from fans every day, with some fans threatening to harm themselves if they could not meet him.

He had to seek help from a psychiatrist to help him cope with the pressure.

Other celebrities have also been targeted by diehard fans.

Only recently, in October, a woman interrupted the premiere of Louis Koo movie A Witness Out Of The Blue by shouting: "I am Louis Koo's wife."