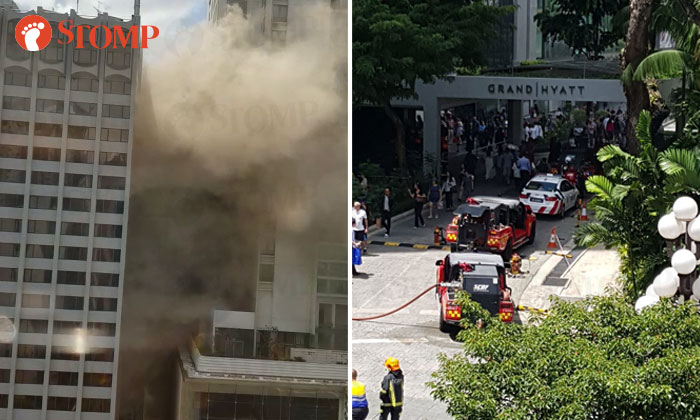 Five hundred people were evacuated after a fire broke out at the Grand Hyatt Singapore on Wednesday morning (Mar 27).

Several Stompers alerted Stomp to the incident and shared photos and videos of smoke coming from the hotel located at 10 Scotts Road.

In one of the videos, bystanders are heard exclaiming, "Oh my God!" as the plumes of smoke get darker.

In some of the videos, several people are seen gathered in front of the hotel's building as Singapore Civil Defence Force (SCDF) officers arrive at the scene.

The SCDF posted a statement regarding the fire on their Facebook page at 1.28pm.

It said that it responded to the fire at about 11.20am.

"The fire involved a kitchen stove and Kitchen Exhaust Ducting (KED) in a restaurant on the 2nd floor," the statement said.

"The fire was extinguished by the water sprinkler prior to SCDF's arrival."

The SCDF used two water jets for damping down operations within the KED to prevent any potential rekindling of fire from the hot burnt surfaces.

"About 500 people were evacuated from the premises by security personnel as a precautionary measure," SCDF said.