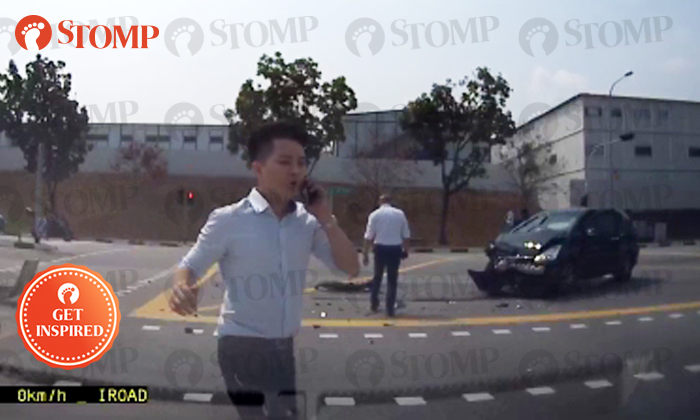 Two men were taken to hospital after an accident involving their cars at the junction of Upper Changi East Road and Expo Drive on Thursday afternoon (Sep 26).

Stomper Edwin shared dashcam footage of the accident scene, which his friend had captured.

Edwin's friend had been driving past at around 3.15pm when he saw what happened and helped to call the ambulance.

Edwin said: "My friend was waiting for the traffic light to turn green when he saw the accident. He immediately rushed over to one of the drivers nearest to him and rendered his assistance."

In a video submitted by Edwin, his friend, who was dressed in a white long-sleeved shirt, can be seen phoning the ambulance.

The Stomper added: "My friend is a Good Samaritan. He did a nice job and I hope more Singaporeans can be like him."

Responding to a Stomp query, the police said they were alerted to an accident involving two cars at 3.17pm.

Both car drivers, aged 33 and 65, were conscious when taken to Changi General Hospital.