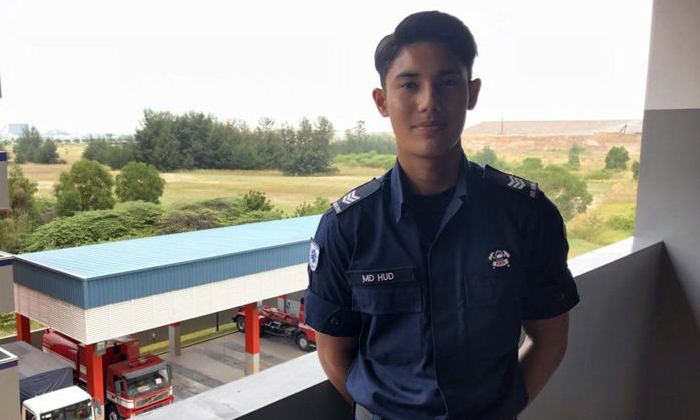 Fire and rescue specialist Muhammad Hud Bin Ayub was in the middle of his routine physical training in Telok Blangah on March 20 when a call came in.

The full-time national serviceman was to report to Pasir Panjang Ferry Terminal with his team as quickly as possible to help put out a blaze at an island south of the mainland.

"I felt an adrenaline rush," said the 19-year-old. "I immediately went into action, preparing for what I need."

Mr Muhammad was one of 128 Singapore Civil Defence Force (SCDF) personnel deployed to fight an oil storage tank fire earlier on Pulau Busing, where he got off the barge to face thick columns of smoke. "I felt the radiant heat when I got nearer to the site," he said.

For 10 hours, Mr Muhammad carried out duties like adjusting ground monitors and replacing hoses. The fire took six hours to put out, with operations ending around midnight.

In its updates on the Pulau Busing fire, the SCDF posted Facebook photos of exhausted firefighters resting along the road, soaked in a mix of water and perspiration. One was of a fireman pouring water on his head to cool off.

Mr Muhammad, who stayed on Pulau Busing until 4am, said: "I wanted the fire to be quickly put out. I felt relieved that the fire was under control and nobody was injured... I was drenched in sweat head to toe afterwards."