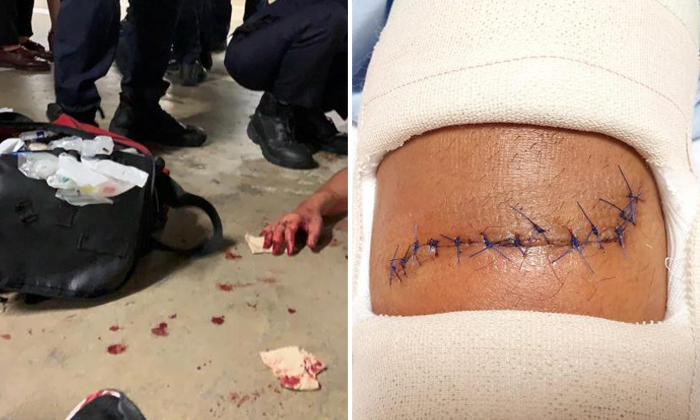 A night of Halloween fun at Marina Bay Sands (MBS) turned to real horror when three partygoers were badly injured by an attacker allegedly wielding a sword in its carpark last Sunday (Oct 27).

One of the three, who gave his name only as Eugene, told The Straits Times on Saturday that their group of eight had been heading home at around 6am after a Halloween-themed party at nightclub Marquee when they were accosted.

While in the basement carpark of the integrated resort, a man dressed in a doctor's coat allegedly charged at him, said Eugene, 25.

"At first I thought it was one of those Halloween jump scare kind of things," he said, describing the blade as resembling a short sword. The sword was swung so hard, Eugene sustained broken bones in both legs.

One of his companions, who gave his name as Wei, 34, said that he stepped in to defend his friend and was also slashed.

He showed ST gashes on his forehead, chin and ear, part of which had been left dangling and had to be stitched back together.

Eugene, a manager, said of his friend: "He was lying in a pool of blood, face turned purple... thankfully one of my friends is a nurse, and she managed to stem the bleeding."

Another friend who was filming the incident on his phone was beaten by another attacker and sustained bruises and a sprain, he said.

The police confirmed the incident, saying it responded to an incident at 1 Bayfront Avenue at about 6.15am on Oct 27.

In the statement, police said three male victims, aged between 25 and 34, were conveyed conscious to Singapore General Hospital. Police subsequently identified and arrested three men, aged between 22 and 24, in connection with the case.

They were charged last Wednesday (Oct 30) for voluntarily causing hurt by dangerous weapon with common intention, which carries a sentence of up to seven years' imprisonment as well as a possible fine and caning.

The trio are in remand and due to appear in court on Nov 6.

Eugene, who had screws inserted in his left leg to join the broken bones, was discharged from the hospital on Friday. Doctors say it will be at least a year before he will be able to walk again.

Eugene and Wei said that they were disappointed with how MBS handled the matter, both during the incident and in the days after.

A security guard arrived on scene only about 30 minutes after the incident, after being alerted by a friend of the victims who had gone looking for help, Eugene claimed.

While the police and ambulance arrived within 10 minutes of being called, there was a slight delay in locating them within the carpark.

"If security knew this was happening under their noses, they would have been able to direct them to us," he said.

Eugene added that he had contacted MBS on Thursday to ask what was being done about the incident and a customer service officer referred him to the police.

Replying to queries, an MBS spokesman said it was alerted to the incident at 6.20am on Oct 27 and responded immediately.

"We take a serious view of this case and are working closely with the Police in its ongoing investigations," she said.