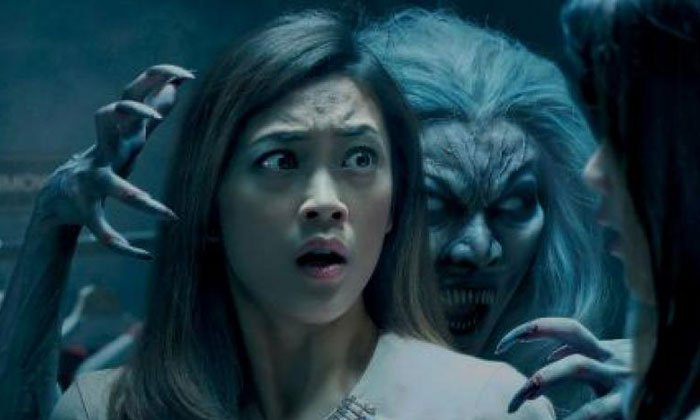 You could say that Miss Yeung Pui Man's job gives her a lot to shout about.

A professional scare actor, Miss Yeung, 28, has been spending her weekend nights haunting people as Malice - one of the seven "Sinisters" - at this year's Halloween Horror Nights (HHN) at Universal Studios Singapore.

When asked how she deals with all the growling and screaming, she laughed as she told The New Paper: "Lozenges. I spam lozenges so that I can continue scaring."

Malice is a vengeful spirit who roams the Death Mall, one of the five haunted houses at HHN, and she has been featured prominently in the advertisements and promotional materials for the event.

"I hide in dark recesses and corners to jump and scare the guests, mostly screaming at them and giving the illusion that I am trying to kill them," Miss Yeung said.

The secret, she said, lies in the make-up and costume, which helps to "bring the character to life".

It takes a team of two to three people 90 minutes to get her into the make-up and costume. Later, they spend an hour to remove them.

"The make-up team do an amazing job. It is magic. With all the make-up, I do not even look like me anymore," Miss Yeung said.

She let on that the most difficult part is staying in character.

"Before I face the public, I have to get into character mentally. I am not me anymore," she said.

"Even if a situation is funny, like someone has a big reaction, I cannot laugh, because Malice will not react with laughter."

As for guests who might be cynical or even make a mockery of her scare-acting, Miss Yeung said she simply moves on to someone else, because "there will always be screams to be found".

Safety, she added, is always a priority. If someone tries to hit her, she retreats. The minders who accompany her and the guests are an additional level of security too.

"You can pick out those who come to the event with bad intentions, so we look out for guests who might behave inappropriately and are alert," Miss Yeung said.

She works in 45-minute shifts, doing about four or five shifts each night. It does get draining, but she said the satisfaction of creating an unforgettable experience for the guests keeps her going.

"When you see people enjoying themselves and being in the moment, it is most fulfilling. I get to take the whole story to them and bring them into another world they really believe in," she said.

She and the other scare actors - almost 500 of them - will be performing on weekend nights until Oct 29.

Miss Yeung performs as other characters at the theme park too, but she feels lucky to play Malice, as getting to scare people happens only once a year.

"People assume it is easy to jump out and scream, but they do not know that behind the scenes, there is a lot of hard work and effort.

"It takes a lot to bring out the whole show, and I am glad I get to be a part of it," she said.

Secrets of the trade

1. The first step is always the hardest. Do not worry about what people might think of you when you are starting out as a scare actor. Just enjoy the experience.

2. Staying in character is important, and it is essential to not break character, even when there are unexpected reactions.

3. A background in performing arts helps, as being a scare actor means putting on a show for a roving and mobile audience.

Related Stories
Chilling photos and spooky sightings that will give you sleepless nights
Is this for real? Men seen in zombie-like trance at Kallang Ave will freak you out
Why you shouldn't freak out if you see this real-life doll on Tokyo streets
More About:
creepy
scary
ghost
sentosa