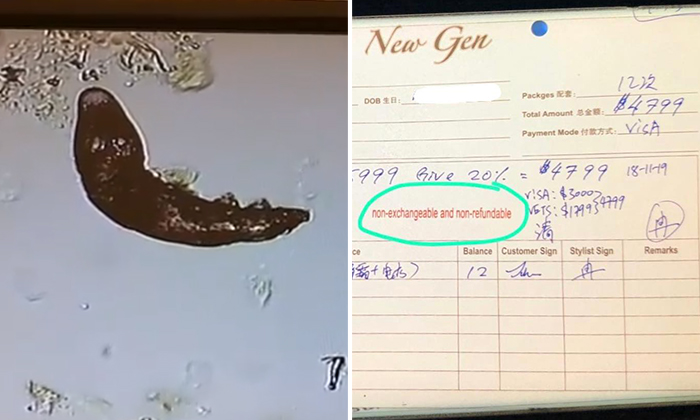 The owner of New Gen Studio has voiced out after a half-balding man paid $4,799 for a package at the hair salon due to "worms" on his scalp.

Facebook user Fiona Han saw her father sporting a new haircut on Nov 18. Before she could pay him any compliments, she was told about the $4,799 package.

Enticed by a $3 haircut, the man visited the salon in Chong Pang.

After having his scalp scanned, it was revealed that there were "worms" on his scalp. He was then convinced to sign up for a package that treated follicle mites.

Han said in a Facebook post: "HELLO EXCUSE ME, this is a neighborhood saloon and they actually charge a freaking $4799 hair package to an elderly who is half balding??!!! The treatment made of gold isit??!!"

Han's father purchased a 10-session package which came with two free sessions. It was originally priced at $5,999 but after a 20% discount, the package came to be $4,799.

Extremely dissatisfied, the family rushed to the salon asking for a refund. After some negotiations, the salon agreed to refund $4,500. The $299 was for the services Han's father already had.

Han later brought her father to a dermatologist who confirmed that there weren't any worms on his scalp.

Han's post has garnered over 1,700 shares ever since it was published on Nov 20.

Joe Zhuang, who is the 31-year-old owner of New Gen Studio, explained that the hairstylist found mites after doing a scan on the man's scalp.

A treatment package was then introduced to the customer and he signed up for it willingly.

"We're even giving two sessions for free with the 10-session package. We already explained the prices clearly to the customer before the incident.

"After the incident, his family members came to my salon requesting to cancel the package. We already agreed to a refund.

"The customer even felt sorry at the time and sent a message apologising for the trouble."

Zhuang also showed AsiaOne closed-circuit television footage of when Han and her husband were shaking hands with his staff at the salon.

He said: "They were happy when they left so I was surprised to hear about them posting about it."

Related Stories
Stomp finds out if offer for males who have served NS to redeem $100 voucher is legit
Notice put up at Riversuites condo clarifies change in security firm had nothing to do with viral incident
Video of Valley Chef chicken franks with white floating material is not "worms", importer clarifies
More About:
viral