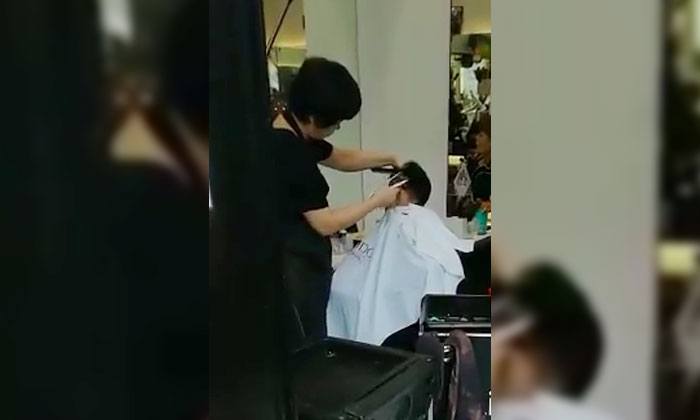 A mother was alarmed when a hairdresser who was cutting her four-year-old son's hair became increasingly rough with the way she was handling the boy's head.

Facebook user Karen Yongie posted an account of what happened at the salon located at Jurong Point along with a video on her page.

She said that before her family started recording her son, Kaeden, getting his hair cut, the stylist was "very fast and rough" as she went through her son's hair with a pair of scissors and a comb.

"The comb stuck at Kaeden's hair many times but instead of trying to comb his hair to free any knots, she just went on pulling and cutting," she wrote.

She said that she started to feel uneasy when she saw discomfort on her son's face.

"She was so rough that I [had] to ask her if she can be more gentle," she wrote.

"She did not answer me.

"I then went over to ask Kaeden if he feels pain and he said yes but she still continue[d] her way."

In the video, the stylist is seen shaving Karen's son's hair with what appears to be force as she pulls and pushes his head around.

Karen is then seen walking up to the woman to stop her before the video ends.

She wrote in her post that after she stopped the woman, the stylist walked to the back of the salon and another lady came to take over the job.

Karen added that her son was not playing or fidgeting and had tried his best to sit as still as possible but couldn't because he "tried to move away from the pain this aunty caused."

She ended her post with: "If you think this video looks bad, the real deal is 10x worse."

Netizens were equally shocked and enraged at the woman's method of cutting the boy's hair.

Many of them are parents themselves and empathised with Karen who said that her "heart so pain when I think of it over and over again".

One netizen even compared the woman's methods to the shearing of sheep.

What would you do if this happened to your child?

Related Stories
Guy who got $118 'mangkuk' haircut gets it fixed by salon
Woman's eyebrows 'disfigured' by botched procedure gets them fixed -- thanks to kind salon owners
Will you pay $29.90 for this pedicure at 321 Clementi?
More About:
bad service
hair
salon