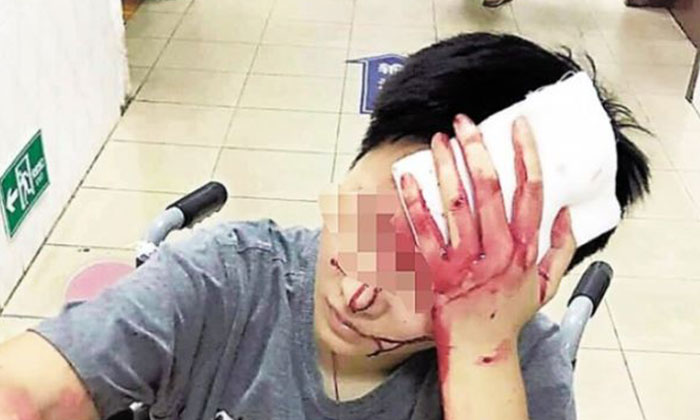 A food delivery driver allegedly beat up a woman — as he was worried that she would lodge a complaint against him.

The incident happened on Saturday evening (Oct 7), and the assault left the victim bloodied, requiring stitches on her forehead.

According to local media, the part-time postgraduate student had ordered a meal through the Ele.me takeaway app at 6pm from a restaurant just a 10-minute walk away from her flat in Haikou, on the Chinese island of Hainan.

The deliveryman was more than two hours late, reports The Star.

At 8.20pm, the victim gave up and went over to the restaurant herself to pick up the food, but was instructed by the driver to wait for him by the entrance to the shop.

Instead of apologising, the deliveryman asked her if she was going to report him to the company, before seizing a car lock and hitting her head with it.

Fortunately, the restaurant owner noticed the commotion and restrained her assailant.

Said the victim: "I was so badly beaten that all I could do was kneel on the ground and try to hold up my head."

The victim then called her friend who accompanied to a hospital for treatment which reportedly cost her 2000 yuan ($411).

Police are now looking for the driver, and representatives from Ele.me said the company was cooperating with the investigation.

However, it added that the company had discharged the deliveryman and had no method of contacting him.