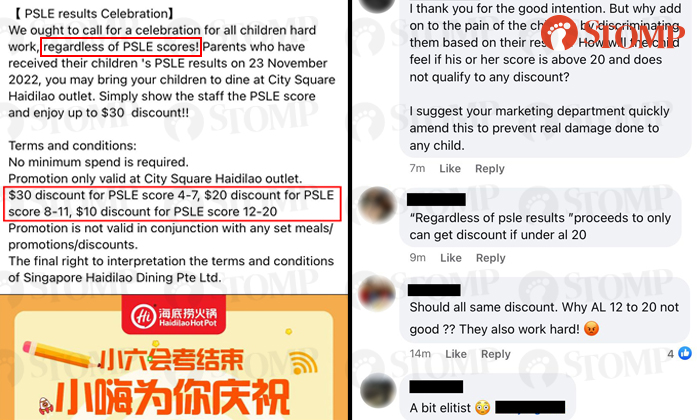 A promotion by Haidilao to celebrate Primary School Leaving Examination (PSLE) scores did not go as planned, leading the hotpot chain to remove the offending posts not long after.

Haidilao had initially offered diners tiered discounts at its City Square Mall outlet based on a child's PSLE performance.

Students with Achievement Level scores of between four and seven would enjoy a $30 discount, while those who achieved scores of eight to 11 would get a $20 discount. Meanwhile, pupils with a 12 to 20 score would receive a $10 discount.

PSLE scores can range from four to 32, with a lower score indicating a better result. 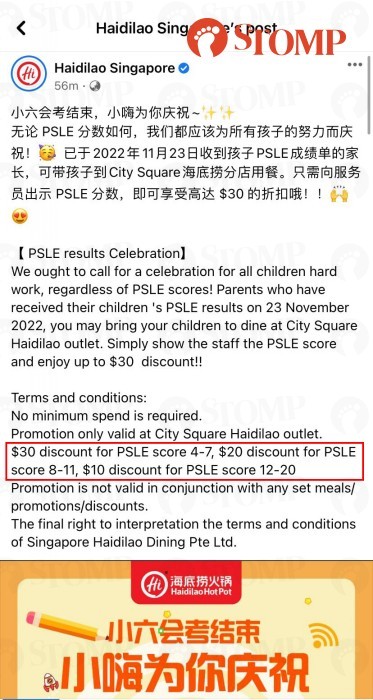 Haidilao had posted the promotion on its Facebook and Instagram pages on Monday evening (Nov 21), with a caption that said: "We ought to call for a celebration for all children (sic) hard work, regardless of PSLE scores!"

The promotion offered "up to" $30 off, with no minimum spend required.

However, the promotion quickly drew the ire of netizens, who felt that it was discriminatory and elitist. 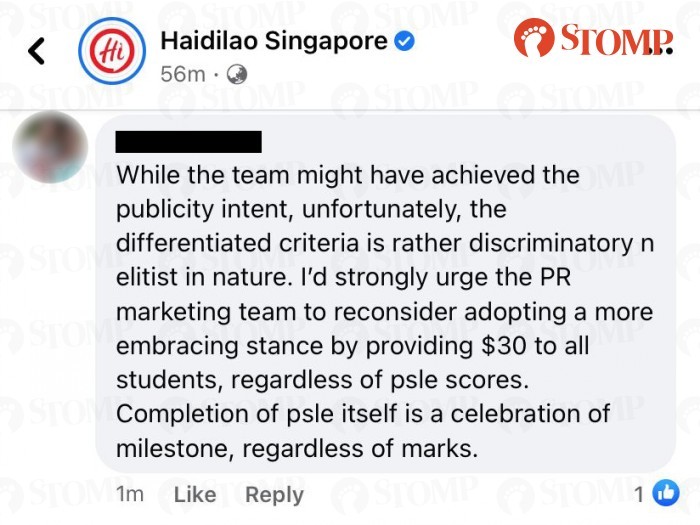 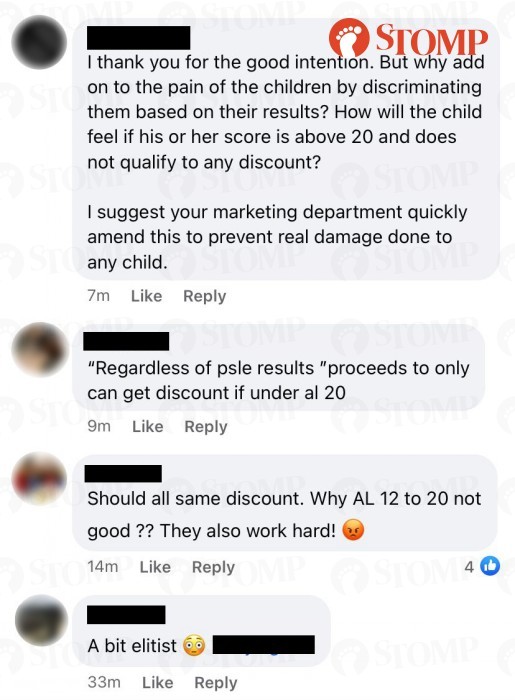 One user commented: "Why add on to the pain of the children by discriminating them based on their results? How will the child feel if his or her score is above 20 and does not qualify (for) any discount?"

The user also urged Haidilao to amend the promotion "to prevent real damage done to any child".

Another netizen pointed out the irony in how Haidilao had said that the celebration was "regardless of PSLE scores", only to offer discounts for those with Achievement Level scores below 20.

Many also felt that all students should be entitled to the same discount regardless of their scores, with one encouraging Haidilao to "reconsider adopting a more embracing stance".

The restaurant chain subsequently removed its social media posts later that night and shared an updated promotion that said: "Simply show the staff the PSLE score and enjoy $30 discount off."

While the promotion is still only valid at Haidilao's City Square Mall outlet, there is now a minimum spend of $150. A new clause has also been added to state that the promotion is available from Mondays to Thursdays until Nov 30.

Netizens praised and thanked Haidilao for updating the promotion.

One said: "Let's teach our children that their grades do not define them."

Another user also wrote in Chinese: "Grades are not everything."

In response to media queries, Haidilao said the outlet "immediately changed the promotion mechanics when we noted that the terms and conditions were erroneous and definitely inappropriate”.

It added: "The promotion is meant to reward all PSLE students for their hard work and celebrate with them. We sincerely apologise for any inconvenience caused and the outlet has decided to extend the promo date to Nov 30, 2022 (available from Monday to Thursday) so that more students can enjoy the promotion."