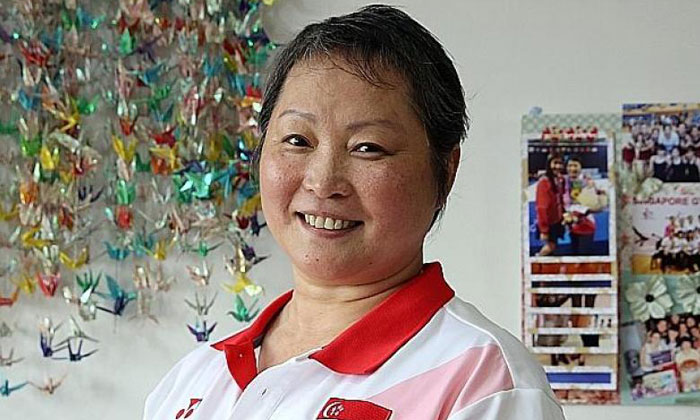 Zhu Xiaoping, the national rhythmic gymnastics coach who led her charges to a historic gold at the 2015 South-east Asia (SEA) Games on home soil, died yesterday morning. She was 56.

She leaves behind husband Lin Zhenqiu and daughter Vanessa Lin.

Zhu made the headlines at the SEA Games, not just for her technical expertise that propelled her team to the gold medal, but also for her spirit and dedication, battling stage-four cancer while coaching the team.

Her sacrifice paid off, as the Republic won its first SEA Games gold in the group all-around event. It was also the first medal won by Singapore's rhythmic gymnasts at a major tournament.

Her husband Lin issued a statement saying: "Our family is deeply saddened to inform you that my wife has passed away in her sleep on Thursday at 5.05am.

"As many of you know, she has been suffering from cancer for some time now. We are relieved that her passing was peaceful and painless."

In June, upon learning of Zhu's struggles, the Cheetahs visited her home and even committed $50,000 in assistance to her family.

"Hougang United is saddened by the passing of Zhu Xiaoping. We were encouraged by her fighting spirit and love for her sport as she battled her illness and at the same time continued to train our Singapore athletes to challenge for honours for the country," he said.

"The club's management and staff visited her in early October last year, and we were heartened that despite her condition, she remained brave and was very positive in her views on life."

A memorial service will be held at Block 403, Fernvale Lane, at 8pm tonight.

The cremation will take place tomorrow morning at 8.45am at Mandai Crematorium Hall 1.