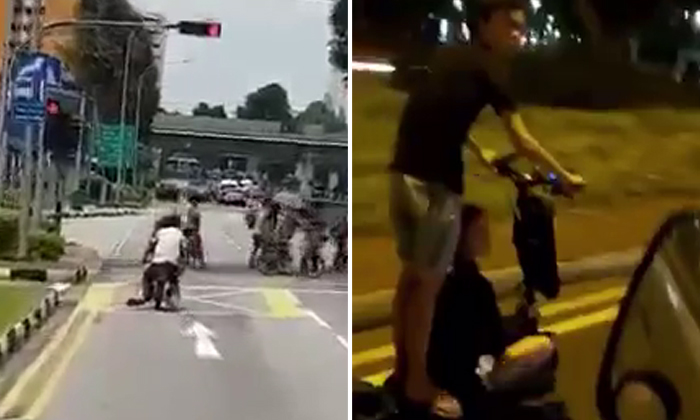 Two e-scooter users were spotted behaving recklessly on the road with their female companions riding pillion in separate instances.

In one incident that took place along Yishun Ring Road on Friday afternoon (Nov 8), a man was seen riding an e-scooter on the road with his girlfriend hitching a ride in front of him.

Facebook page SG Road Vigilante uploaded a video of the incident that occurred at around 12.30pm, showing how the e-scooter user rode past pedestrians who were crossing the road at that time.

This was even though the traffic light was not in his favour.

Stomper R, who shared the video with Stomp, said: "This personal mobility device (PMD) rider clearly doesn't care about the pedestrians who were crossing and just rode on the road without stopping.

"Before this video was taken, the PMD rider did not even care about vehicles that were turning. He was riding in the middle of the lane, fast.

"Riders like these are the reason for the ban. I hope he learns his lesson soon."

In another incident, Facebook user Nur Fadilah also uploaded a video of a similar sight.

The 25-second clip shows a man riding his e-scooter with his female companion seated at the front.

It is unclear when and where exactly this happened.

Fadilah, whose video has garnered more than 680 shares ever since it was uploaded on Friday, wrote: "...brainless... u think ur father road is it?"

Related Stories
Driver stops to advise PMD rider to get off the road
PMD users seen riding on grass patch after ban -- but it's illegal too
Trio on e-scooter narrowly miss pedestrians and beat red light in Hougang
More About:
pmd
e-scooter