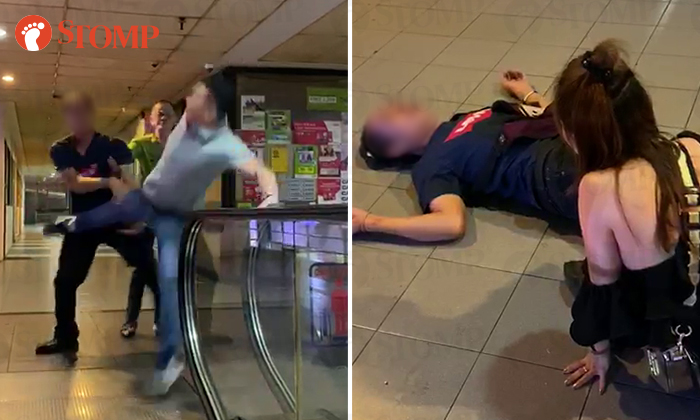 The police are currently looking into a case where a man had allegedly assaulted another person at Golden Mile Complex at about 2.45am on Saturday (Nov 9).

A Stomper was celebrating his friend's birthday at the shopping complex when he was alerted to the incident.

He contributed photos and videos of what he saw at the scene and told Stomp: "My friends and I were at level one when we heard some commotion from the third floor.

"When we rushed up to take a look, we found a man, who was in a grey t-shirt, assaulting an older man.

"The older man had collapsed onto the ground due to the assault."

The video shows the man in grey kicking the older man, who manages to grab onto the assailant's leg.

The man in grey throws the older man onto the ground and kicks him several more times.

The Stomper added: "I took a video of the assault and when the man in the grey t-shirt saw me filming, he quickly ran away.

"Both police and ambulance came over to the site soon after.

"I'm sharing the video so that the man in grey t-shirt can be identified and arrested."

In response to a Stomp query, the police said: "On Nov 9 at about 2.45am, the police were alerted to a case of voluntarily causing hurt at 5001 Beach Road.

"The police are looking into the matter."