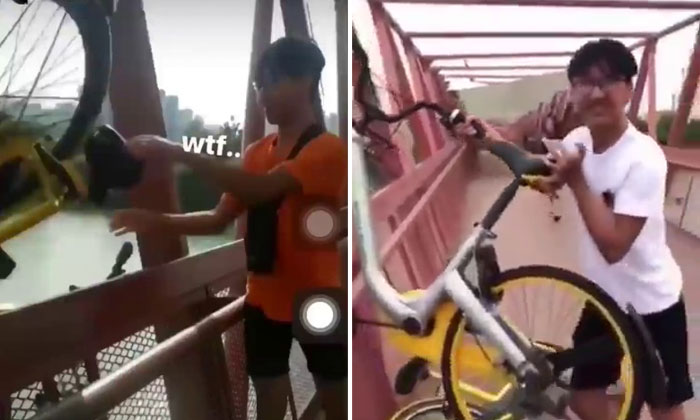 A youth was seen throwing an oBike and ofo bike off a bridge and into a river in Instagram story videos that have been circulating online.

Stompers Whylah, John, Siew Hee and Ross first alerted Stomp to the incident that they said occurred at the Lorong Halus pedestrian bridge in Punggol.

After doing a search online, the brick-red bracings on the bridge indicate they may be right.

It is unclear when this happened.

In the first video, a guy wearing spectacles and holding a cigarette unexplainably throws the bicycle off the bridge as a couple of his friends are heard off camera.

One exclaims, "Alamak!" while another guy with impressive foresight warns his friend, "Eh, wait you kena Stomp."

The youth who threw the bike simply laughs and takes a puff from his cigarette before the video ends.

Stomper Adhwa alerted Stomp to another video that was posted on Twitter of the same guy, wearing a white shirt this time, throwing an oBike over the bridge.

The text, "Round 2" is embedded in the video.

Bloody clowns now you know why Singapore government is afraid to help us because of clowns like you'll pic.twitter.com/TXmobSjblT

The police responded to Adhwa's tweet to Stomp regarding this incident and said that they are aware of the matter:

Hi, the Police are aware of the matter. Anyone can provide more information via the I-Witness portal at https://t.co/vFaLcorhH5. All information will be kept confidential.

Unfortunately, this is not the first time people have been caught throwing bikes from a height or into a body of water.

Last June, a 14-year-old boy was arrested after throwing an ofo bicycle from the 30th floor of an apartment block.

In the same month, a group of four teenagers were arrested for throwing an oBike into a canal in Punggol before riding an ofo bike into Punggol MRT Station and Bus Interchange.