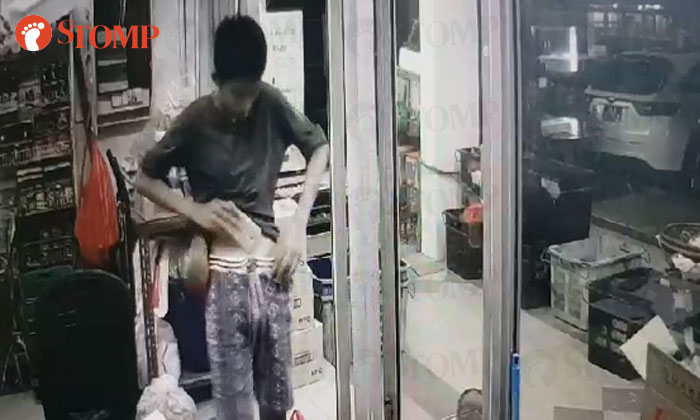 A youth was caught on video taking a phone that did not belong to him and shoving them down his shorts before leaving a shop at Block 215 Ang Mo Kio Avenue 1 yesterday (Mar 7).

Stomper Jocelyn, the daughter of the shop's owners shared the video with Stomp.

"My mother was present by herself at the shop as my dad was in the washroom," she said.

In the video, the guy was seen walking into and out of the shop while making a couple of glances at a table.

He then went out to talk to Jocelyn's mother.

"He asked her about names of drinks that she had never heard of before to which she told him that she did not sell such drinks at the shop," Jocelyn said.

"He then insisted that she could get any drink for him available in the shop."

When Jocelyn's mother went in to get the drink, the guy then grabbed a phone from under the table in the shop and stuffed them down his shorts.

According to Jocelyn, after the video cut off, her mother had shouted, "Boy, you took something from me!"

She said that the guy then ran "full speed" towards AMK Hub.

She added that the phone was last tracked at Block 703 Ang Mo Kio Avenue 8.

"Please keep a look out of this boy who is believed to be living around the area as neighbours have seen him walking around," she said.

She told Stomp that a police report has been made.