Guy sits on PMD in train on East West Line: "He was hogging up a lot of space" 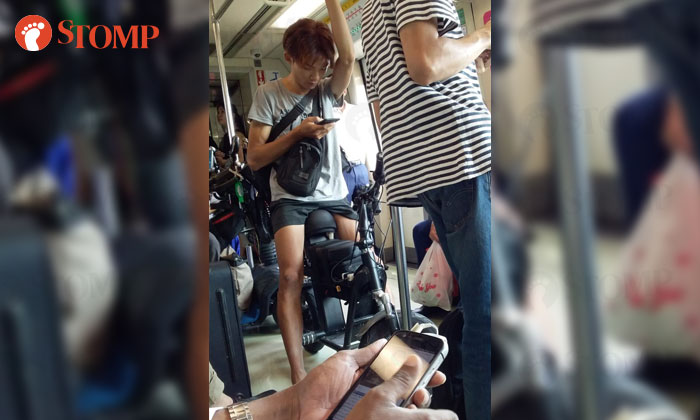 Commuters know that train cabins can get a little cramped at times so it does not help when bulky personal mobility devices (PMDs) take up space in there.

Stomper Jeremy was surprised to find a PMD rider seated on his device in the middle of the cabin when he boarded the train at Queenstown on Thursday (Sep 12) at about 10.30am.

"He was hogging up a lot of space," said the Stomper.

"Obviously, people could not stand there and commuters had to move aside to accommodate him.

"He was also making it difficult for those alighting and entering the train.

"I thought these things were supposed to be smaller and portable.

"I'm not sure how the staff let him on."

Jeremy said that the PMD rider was still on the train when he alighted at Eunos MRT Station.

This is not the first time, Stomp has been alerted to a PMD user riding a device into a train.

In April this year, a man was seen sitting on his PMD on a train on the North South Line.

Related Stories
Man rides PMD into train on North South Line
GrabFood rider spits on ground, curses at driver who honked at him for crossing while red man is showing
PMD rider blocks traffic by stopping in middle of junction, then gestures at driver to go around him
More About:
PMDs
train
MRT
inconsiderate