Guy shares why he worked so hard to buy GF Louis Vuitton bag, gets brutal comments 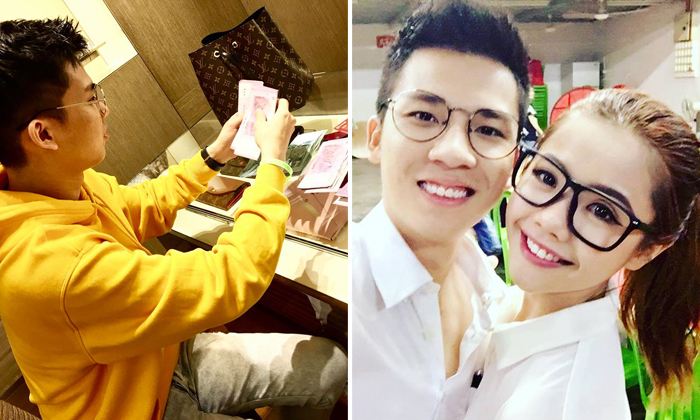 A man in Malaysia shared why he made it his mission to buy his girlfriend a branded bag, even though she is successful on her own and could have afforded it herself.

In a series of photos, Facebook user Eugene Ng explained why it was his "duty as a man" to give his other half "everything" -- be it money, fame, love or time:

According to Eugene, girls might say, "It’s fine. As long you are with me I am happy," but deep down still want to be pampered by the one she loves.

"We as men, should be smart a bit hor. Work harder and make it happen for her," he added, going on to elaborate why he bought his girlfriend "another new bag", this time from a Louis Vuitton boutique at Pavilion mall.

A birthday gift + Emerald gift 🎁 for her.

Many people ask me. 🤔
What is the best thing you can give your other half ?...

Eugene also expressed his desire to fulfil his duty as a son, because his parents are the ones who "gave him life".

He said his next goal is to get his mother a designer bag, after having bought her a car and a house, as he wants to "give her the best life".

Be strong, be powerful but never be arrogant and ignorant.

Be a filial son.
Be a responsible boyfriend.
Be a man with abilities and capability.

This is what a man should be like.
This is my kind of MAN.

Eugene's post on July 11 has garnered over 12,000 likes, 14,000 shares and 3,400 comments to date, unfortunately drawing more negative than positive reactions.

Some netizens questioned the authenticity of Eugene's story, pointing out that he was driving a Mercedez Benz despite claiming that he was not from a well-to-do family.

Meanwhile, many users felt that Eugene was showing off, praising himself and equating materialism with love.

A select few, however, were kinder with their words.

Related Stories
Malaysian man named 'best husband ever' after helping wife with this
Dumped by ex-BF while pregnant, Malaysian girl shares how she found Mr Right
Indonesian girl ridiculed for relationship marries her South Korean Prince Charming
Russian beauty marries Chinese coal miner -- even though he has no house, car or savings
Photos of stunning woman with 'Average Joe' husband and baby go viral
Indian man from lowest caste cycles from India to Europe to be with his Swedish wife
More About:
love
romantic
couple
heartwarming
Malaysia