Guy makes presentation slides on why he's a catch: Includes reviews from mother, ex-GF and... cat 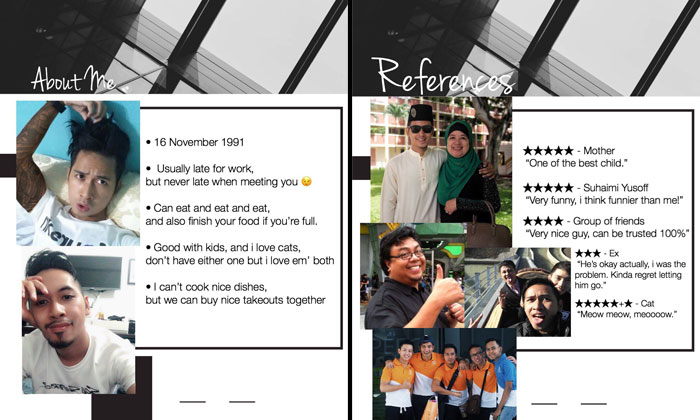 In an app flooded with people looking for love, how do you make yourself stand out?

A Singapore guy decided to create a deck of presentation slides on why women should 'swipe right' on him on popular dating app Tinder.

Twitter user Azzrul shared his slides on his feed on Aug 31. The post has since garnered over 3,000 likes and 3,000 retweets.

when u gotta make something interesting about yourself, so you’d stand out from other goodlooking guys on tinder HAHAHAHA pic.twitter.com/YHDLKeixRo

In his slides, the 28-year-old lists his best qualities including being able to 'eat and eat' and being good with kids and cats.

He adds that he can take nice OOTD (outfit of the day) shots and would probably stare at a prospective date a lot as he 'appreciates art in all forms'.

To round off his presentation, he included stellar reviews from his mother, comedian Suhaimi Yusoff, his friends, a three-star rating from his ex and a generous six-star rating from a cat ("meow meow, meoooow").

A day after his tweet was posted and started circulating online, Azzrul explained he initially did it as a joke but 'doesn't regret anything'.

i did this as a joke cus i’m bored, and after posting last night......i don’t regret anything hahahahahaha y’all are so nice 😂🤪 https://t.co/AGtus2TpZw

This is not the first time someone has promoted themselves to potential suitors through presentation slides.

In 2017, a Singaporean woman's inbox was flooded after she created slides on why men should date her.

Related Stories
S'porean woman creates presentation slides on why you should date her, gets inbox flooded
S'pore girl sends brutal texts telling BF to 'man up' and says he makes her IQ drop
Girl goes ballistic on Tinder match just because he didn't read her profile
More About:
dating
funny
Tinder
relationships