Guy grateful to fellow rider who stopped to help after his bike broke down: 'We are brothers now' 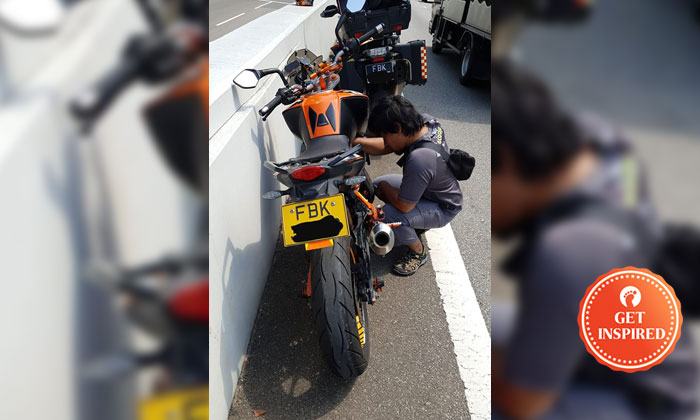 A rider was touched when a fellow motorcyclist stopped to help him when his bike broke down along Queensway Underpass on Oct 1 at about 2.40pm.

In his post, the 23-year-old recounted how his bike had broken down on his way to work.

He wrote that he had no idea what was wrong with his vehicle and tried to push it towards the nearest bus stop before calling for a towing service but found the slope too steep.

As he was running late for work, he decided to leave his bike where it was before calling for a taxi.

"While I was walking through the underpass, I constantly turned my head back, checking for my safety because there are [a lot] of vehicles," he wrote.

"I saw this man riding his BMW with his hazard lights switched on.

"He parked his bike at the road shoulder and asked, 'Hey bro, what happened to your bike? I saw you struggling from opposite [the road].'"

Boon Xiang told the other rider that when he opened the bike's throttle there was no power.

That was when Ahmad told him he had tools with him and offered to try starting his bike.

Boon Xiang wrote: "As you guys know, it's a really sunny afternoon and he offered to push my bike up the slope with me.

"He then took out his tools and tried to rectify the problems with my bike.

"We had a small conversation during the process and guess what?

"He was on his way to mosque but he saw me struggling so he then decided to make a U-turn and offered his help.

"When he couldn't find out what's the problem with my bike, he even apologised to me.

"Like what? I was more than grateful with all the help he offered!!!"

In the end, Boon Xiang managed to get his bike towed to a workshop.

When Stomp reached out to him, he said that he has been riding for seven months and this incident is the second time his bike has broken down.

"The first time, it happened at a carpark so it was easy to manage but having my bike break down along Queensway Underpass where there are a lot of vehicles was a first," he said.

He told Stomp that he could not put into words how he felt from his interaction with Ahmad.

"You have to be me to truly know how it felt," he said.

"To sum it all up, I'm sincerely and truly grateful."

He added that the experience has left him with a desire to help others who may end up in the same situation as him.

"Now I know how it feels to be helped, so I want to help others when they are in need."

When asked what he would like to say to Ahmad given the chance, he replied: "Thanks for helping a stranger in need. After what happened, we are brothers on the road now."